Carousel is one of Rodgers and Hammerstein’s most famous musicals, and was reportedly the composer’s favourite score. Stephen Sondheim, a close personal friend of Hammerstein agreed with this and said of the show “whilst Oklahoma! is about a picnic, Carousel is about life”. The musical has been revived all over the world on numerous occasions, with Nicholas Hytner’s 1992 National Theatre production setting the standard for new revivals. The show was turned into an MGM film in 1956 which starred Gordon McRae and Shirley Jones. In the UK the show’s score can be heard on the football stands as Liverpool FC adopted the anthem ‘You’ll Never Walk Alone’ as their official song. 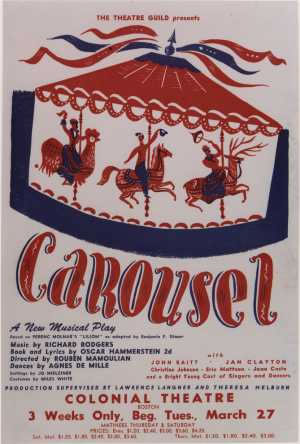 The Play “Liliom” By Ferenc Molnar As Adapted By Benjamin F. Glazer

The show begins in 1873 in a small seaside community in Maine. Throughout the Prologue (“The Carousel Waltz”) two mill workers, Julie Jordan and Carrie Pipperidge visit the fair and catch the eye of Carousel barker Billy Bigelow. Mrs Mullin, the owner of the Carousel scolds Billy and tells Julie never to return. Billy sees that she is jealous and embarrass her, causing her to fire him. As the girls are left alone, Carrie pushes Julie to admit her feelings towards Billy but she seems somewhat shy (“You’re a Queer One Julie Jordan”). Carrie is thankful that she now has a beau so she can tell Julie all about her own love, “Mister Snow”. Billy returns to the girls in time for Mr Bascombe, the mill owner to see her about to break curfew. He offers to escort her back to the mill but she refuses and is fired. He warns her about the likes of Billy. As the couple are left alonei they talk about what it would be like if they loved each other and struggle to contain their mutual attraction, (“If I Loved You”).

A month later the townsfolk are preparing for a summer clambake with Julie’s cousin Nettie Fowler (“June is Bustin’ Out All Over”). Julie and Billy are now married and live with Nettie, but she confides in Carrie that Billy has hit her, Carrie is more smitten with her love life, introducing Mister Snow to the girls (“Mister Snow Reprise”). Billy is rude to both Enoch Snow and Carrie and goes off with the villainous Jigger, much to Julie’s dismay. Enoch and Carrie are left alone to plan their perfect life together, which Enoch expects will involve many children, (“When the Children are Asleep”).

At the shipyard Jigger and his shipmates sing about their life on the sea, (“Blow High, Blow Low”). He tries to recruit the unemployed Billy to assist with a robbery which he thinks will make them a lot of money. He is unsure as it may involve the killing of Julie’s ex-boss, Mr Bascombe. Mrs Mullin reappears to tempt Billy back to the Carousel but he turns her down. Julie tells him that she is pregnant and Billy is instantly happy. He contemplates live with his future son, or daughter, (“Soliloquy”). Everyone prepares to attend the Clambake and Billy decides to join Julie, so he can carry out the robbery with Jigger.

Act Two opens with the whole cast talking about the fantastic clambake, (“This Was a Real Nice Clambake”). Jigger makes an effort to be noticed ahead of the robbery and flirts with Carrie as Enoch finds them in a compromising position, (“Geraniums in the Winder”). The girls attempt to calm Carrie down and Julie gives them her philosophy on love, singing “What’s the Use of Wonderin’?” As the treasure hunt begins, Billy and Jigger return to shore to deal with the robbery. They pass the time playing cards and staking a claim at the money they are about to steal. The robbery goes wrong and Mr Bascombe pulls out a gun to use on Jigger who gets away. To escape punishment Billy stabs himself just in time for Julie to enter and speak to him one final time. As everyone returns from the Clambake, Julie is left alone with the dead Billy and Nettie helps her in her hour of need, (“You’ll Never Walk Alone”).

Billy is greeted by a Starkeeper who takes him to heaven. He tells him he did not do enough good to get into heaven, but can still return to earth for one day to redeem himself. Fifteen years have passed in a flash and he tells Billy he should return to earth to help his daughter Louise. Through an extended “Ballet” we see Louise alone on the beach, lonely and bitter, being taunted by the children of Carrie and Enoch. Billy observes, and steals a star before deciding to help her on earth.

Julie is visited by Carrie and her perfect family who tell her about their recent trip to New York. Their life is exactly how Enoch predicted, with everything running like clockwork. Their oldest son tries to flirt with Louise but she is mean to him and he taunts her about her father. Louise is angry, and Billy lets himself be seen, startling her on her porch. He offers her the star, but loses his temper, slapping her after she refuses to take it. She runs to get her mother as Billy asks to be invisible. Louise asks if it is possible to be hit and not feel a thing, and she tells her that it is. Although she can’t see Billy, she finds the star and seems to feel his presence, (“If I Loved You Reprise”).

At Louise’s graduation ceremony the class are encouraged not to be held back by their parents or bask in their success, but instead live for themselves. As the ensemble sing a reprise of “You’ll Never Walk Alone” Billy tells his daughter to believe in the words, and she reaches out to a classmate, determined not to live life as a loner. He tells Julie he loves her and as they unite with a new power, Billy is granted access to heaven.