Jersey Boys is the hit Broadway musical that transferred to the West End in 2008 and made its home in London. Documenting the highs and lows of Frankie Valli and the Four Seasons, Jersey Boys follows how the boys went from a downtown band to an uptown success. Narrated by Tommy DeVito, Bob Gaudio, Nick Massi and Frankie Valli, the musical tells their story, featuring many of the hit songs from the band’s back catalogue, including “Can’t Take My Eyes Off You”, “My Eyes Adored You”, “Sherry” and “Who Loves You”. Winning both Tony and Olivier Awards, Jersey Boys is an international success, touring across the UK and US, as well as opening all over the world in countries such as Tokyo, Singapore, Melbourne and Utrecht. 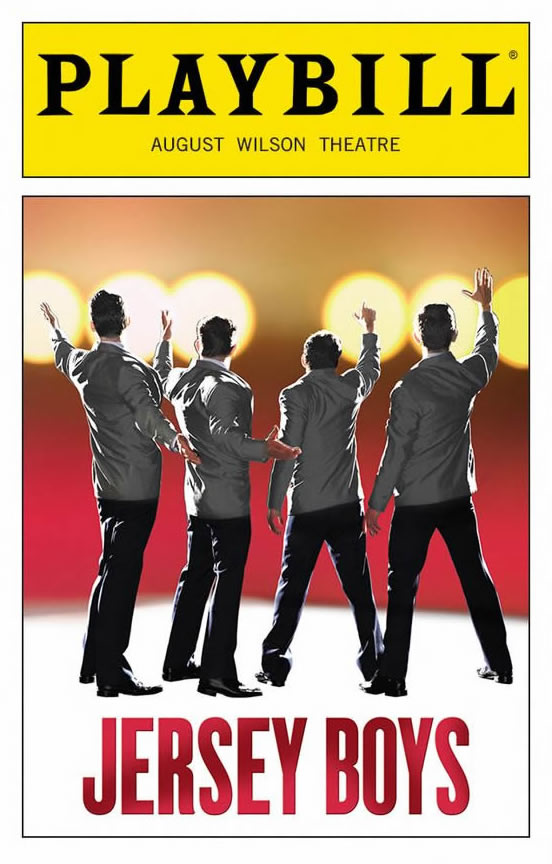 Frankie Valli and The Four Seasons

Jersey Boys opens with a performance of a rap song released in 2000. Tommy DeVito appears and explains that the song is a cover of one of The Four Seasons’ hit tracks. He begins to narrate the story of the band, detailing how the group began as “The Variety Trio” with Nick DeVito and Nick Massi. When they discovered Frankie Castelluccio, they took him under his wing and taught him everything he knows. During the early years of the band, Tommy went in and out of prison, Frankie changed his last name to Valli and the pair also developed a friendship with mob boss Gyp DeCarlo. Frankie also falls in love with a married Mary Delgado. As the band continue to struggle with their name and sound, Joe Pesci introduces them to Bob Gaudio.

Bob Gaudio becomes the narrator and informs the audience that Tommy did not “find” him, as he already had a hit with “Short Shorts”. Bob and Joe go to watch the band and are impressed with Frankie’s voice. Bob performs a song he’s recently written, with Frankie, Nick and Tommy joining in with vocals, bass and guitar. The four negotiate an agreement and Tommy becomes sceptical that Bob will be good for the band. Eventually, the four get producer Bob Crewe involved, who insists that they need to make a firm decision with their name and sound. After a night at The Four Seasons bowling alley, they name themselves and with Bob’s songs they are propelled into stardom. As they begin to tour, Bob loses his virginity and Frankie’s marriage to Mary comes to an end. They continue to huge success, but are soon approached by a loan shark who has come to claim money owed by Tommy.

Act II begins with Nick Massi as the narrator. He explains that Bob was so focused on writing for the band that he couldn’t see they were in trouble. Tommy racked up numerous debts and a forgotten bill lands the boys in jail for the weekend, straining the relationship between Tommy and Bob. Tommy becomes increasingly jealous of Frankie’s success and his relationship with Bob and attempts to seduce Frankie’s new girlfriend, Lorraine, destroying their friendship. When the loan shark reappears, Frankie foes to Gyp DeCarlo for help. Gyp and the loan shark come to an agreement and Tommy is sent to Las Vegas, where the mob can keep an eye on him. The band cover the debt, but Nick declares that he wants out.

Frankie then becomes the narrator and explains that he never understood why Nick wanted to leave. Frankie and Bob find replacements to keep the band a quartet, but Bob announces that Frankie should go solo as Frankie Valli and The Four Seasons. Frankie’s relationship with daughter Francine becomes strained when he breaks up with Lorraine, but his musical career continues with smash-hits. As Frankie and Bob continue to release hits and pay off Tommy’s debts, disaster falls as Francine dies from an overdose. Bob Crewe then appears to describe The Four Seasons’ 1990 induction to the Rock and Roll Hall of Fame, reuniting the original Seasons back to the stage. Each member explains his pride at being part of the band.