Easter Parade is yet to surface on the stage, but remains one of the most popular musical films of the ‘golden age’. Released in 1948, the film starred Judy Garland and Fred Astaire, who were at the time two of the biggest names in Hollywood musicals. The film features a score by Irving Berlin and includes standards such as ‘Seppin Out With My Baby’, ‘We’re a Couple of Swells’ and ‘Snooky Ookums’, which have gone on to be covered by artists around the world in stage shows, films and albums. The film was the highest grossing musical of the year and the most financially successful show for both Astaire and Garland, and remains popular with each new generation. 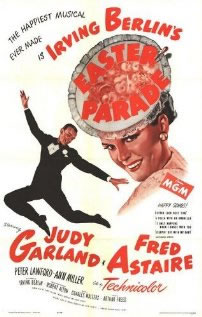 It’s Broadway in 1912 and stage star Don Hewes goes to buy Easter gifts for his girlfriend Nadine, which include flowers, a hat and a cuddly bunny rabbit. He takes the presents to Nadine who is also his dancing partner. She tells him that she has had an offer to join a show where she would be a solo star, and Don attempts to persuade her to stay. His friend Johnny arrives and Nadine tells him that they are not going to be dancing together any more and it is clear she has feelings for Johnny.

Don is upset and drinks in a local bar. Johnny tries to convince him that everything will be okay, but Don brags and says he will make the next girl he meets a star and picks out one of the girls from the chorus. Hannah Brown attends rehearsal with him the next day and he tries to make her a copy of Nadine, giving her fancy dresses and the stage name ‘Juanita’. At their first outing Hannah can’t handle the pressure and their dance is a disaster.

Hannah and Johnny seem to hit it off straight away and Don is immediately jealous. Don realises he made a mistake trying to turn Hannah into Nadine and starts from scratch to make routines to suit her personality. They become a duo called ‘Hannah & Hewes” and perform a montage of successful performances. They audition for the Ziegfeld Follies where Nadine is working as a dancer and Hannah demands to know if Don and her were ever in love. Johnny arrives and takes Hannah out for dinner and tells her that he is in love with her. She is flattered but tells him she is actually in love with Don and has been deliberately been making mistakes in order to make their rehearsals last longer. Don tells her that he turned down the Follies gig, saying that Hannah and Nadine are not meant to be in the same show.

Don goes to see Nadine’s show and is unimpressed. He invites Hannah to dinner where he suggests a dance rehearsal and Hannah is furious that he hasn’t noticed her new clothes and only sees her as a pair of dancing shoes. As she goes to leave Don kisses her and they realise they are in love. Their double act continues to get booked for variety shows and they regularly perform together. As they leave to celebrate they end up watching Nadine perform and the audience give Don and Hannah an ovation as they walk in which angers Nadine. She gets Don to perform with her for old time’s sake which makes Hannah jealous and she runs out. She feels used and yells at Don as he arrives at her apartment. She throws him out and consults Johnny who tells her to take him back. The next morning she goes to meet him, and Don starts receiving gifts such as a top hat and a rabbit. Hannah arrives and they join together in the Easter Parade as Don proposes to her.

Evita features music by Andrew Lloyd Webber and lyrics by Tim Rice and is one of their most successful musicals. The show is based on the life of Argentine political leader Eva Peron who became the spiritual leader of the nation rising from nothing to become one of the most famous political figures in the country’s history. The show tells her rise to fame through the eyes of the people, using an omniscient narrator to chart her journey. The show had an incredible run in the West End and on Broadway. 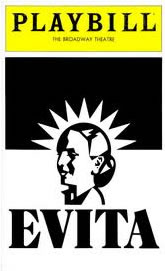 The story begins in a cinema in Buenos Aires, Argentina on July 26 1952. As the audience watch a film, it is interrupted by the manager who says that Eva Peron, the spiritual leader of the nation has passed away. A “Lament” begins and we see how the people of Argentina react to the news. The narrator Che looks on unimpressed and comments on what has happened to a city mourning the death of a celebrity, (“Oh, What a Circus!”).

We go back in time to see Eva in 1934 at the age of 15. Her first love affair was with a tango singer, Agustin Magaldi (“On This Night of a Thousand Stars”) whom she begs to take her to Buenos Aires. He is warned by her family (“Eva Beware of the City”) but finally gives in and Eva sing about her ambitions in the capital city, (“Buenos Aires”). He leaves Eva as she realises he is actually married, and she begins sleeping her way to the top with whoever will help her fulfil her goal as an actress, (“Goodnight and Thank You”). Che tells about the changing political face of Argentina and the right wing coup of 1943, and we see Colonel Peron climb the political ladder, (“The Lady’s Got Potential / The Art of the Possible”).

At a charity concert in Luna Park, Eva meets Peron (“Charity Concert”) and the two realise they can both help each other out (“I’d Be Surprisingly Good For You”). She kicks Peron’s Mistress out of the bed, who wanders away never to be seen again, (“Another Suitcase in Another Hall”).

As it becomes public knowledge that Peron and Eva are together, she is met with disdain from the upper classes and the Army who are nervous of a lower class girl so close to power, (“Peron’s Latest Flame”). In 1946 we see Peron beginning his election race, which Eva assures him will be successful. Together they fight for “A New Argentina” threatening to take down anyone who stands in their way.

Peron is elected to President in 1946 and stands on the “Balcony of the Casa Rosada” to address the thousands of poor ‘descomisados’ who wish for a better future. Eva tells the gathered crowd that she once hoped for fame and glory, but is now focused on her people “Don’t Cry For Me, Argentina”. Che ponders the price of fame as Eva greets people at the inaugural ball,(“High Flying, Adored”).
Eva begins to grow more popular than her husband, and demands to be dressed as good as possible, (“Rainbow High”). She sets off on a European tour to meet heads of state, but is met with mixed reactions in the warn torn Europe. She continues to despise the Upper Class, (“Rainbow Tour”). Che wonders when she will actually begin her charitable work, commenting that “The Actress Hasn’t Learnt the Lines (You’d Like to Hear”). She set up her foundation for the poor which acts a cover up for money laundering, (“The Money Kept Rolling In (And Out)”). As she visits the church to take sacrament (“Santa Evita”) she goes into a trancelike state and has a vision which manifests itself as her dancing with Che who represents the people of Argentina (“Waltz for Eva and Che”). She finally admits that she is dying and realises that Peron love her for herself and not the publicity it brings him, (“You Must Love Me”).

She fights to run for Vice President, but the army are getting sick of her political meddling (“She is a Diamond”) and Peron tells her that her health must come first. Realising that the cancer is slowly taking over her body, she tells the people of Argentina that she loves them “Eva’s Final Broadcast” and her achievements fly past her eyes in a “Montage”. She dies and the embalmers preserve her body, before it is stolen for 16 years, (“Lament”).