Sunny Afternoon is the hit West End musical, originally premiering at the Hampstead Theatre before transferring to London’s Harold Pinter Theatre for an extensive run. Winning the sought-after 2015 Olivier Award for Best New Musical, Sunny Afternoon features a huge back catalogue of some of The Kinks’ greatest hits, including “Lola”, “Waterloo Sunset” and “Dedicated Follower of Fashion”. Written by Joe Penhall, with music from Ray Davies, the musical documents brothers Ray and Dave Davies as they encounter the highs and lows on the way to becoming one of Britain’s best bands of the 1960’s. 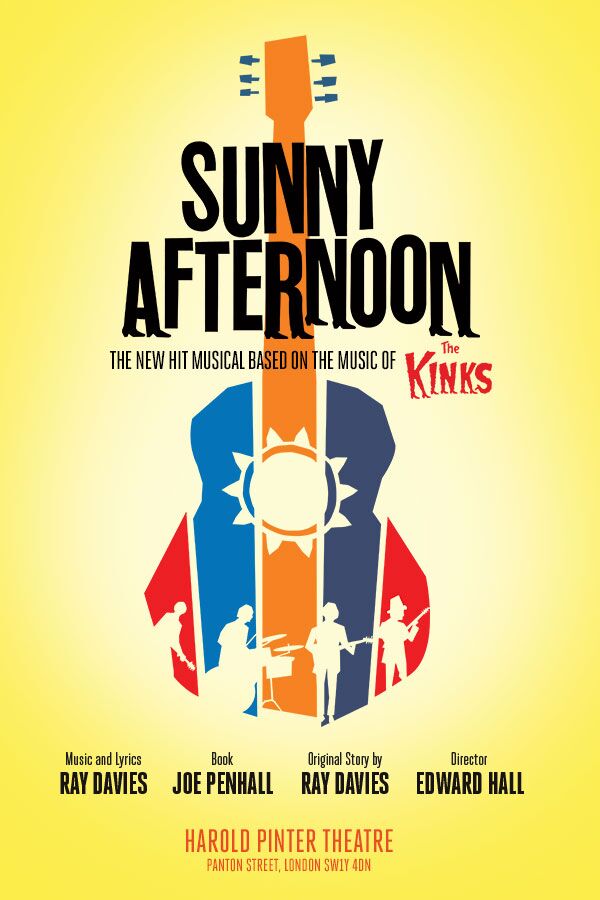 Ray Davies brings the hit music from British band The Kinks to the stage, following the true story of their rise to fame.

Set in London, during the battle of classes in a conservative 50s and upcoming, liberal 60s, Sunny Afternoon follows the true story of The Kinks and their rise to fame. Act I opens with the band featuring as backing for Robert Wace as The Ravens. Wace sings a toned-down version of “You Still Want Me”, which Dave Davies soon tires off and the band start their own rock riff with “I Gotta Move”.

A stunt move, the band are soon snapped and signed, with their manager convincing them to change their name to something more sexy and memorable, eventually coming up with The Kinks. They are redesigned, refashioned and given an image that reflects their upbringing in Muswell Hill. Negotiating contracts, Ray doesn’t understand why much of his money is handed out to agents and managers when it’s him that’s writing the songs.

They begin to grow a firm fan-base and also begin to attract many female fans, and Ray meets Rasa after a particularly rollicking concert. As the musical continues, Ray struggles to cope in a world where money is the precedent and Dave spirals rapidly out of control, drinking a lot and trashing hotels. Rasa becomes pregnant and the pair marry, but their relationship is jeopardised by Ray Davies’ wayward mind. Soon, the band go from creating a unique sound to arguing through riotous gigs, with Dave Davies and Pete Quaife regularly falling out.

Soon, Ray and Rasa’s relationship is in tatters, Ray and Dave have completely fallen out and Pete wants to leave the band. Woven throughout the musical are The Kinks’ hit songs, as well as the Davies’ rivalry, management issues, Ray’s marriage to Rasa and their being banned from America due to a dispute with the musicians’ union. Based on the real story of The Kinks, Sunny Afternoon discovers how the band rose to, and almost fell from, fame.