Urinetown: The Musical is a satirical musical that features a score by Mark Hollmann along with lyrics by Hollmann and Greg Kotis. The musical was one of the first shows to open in New York after the 9/11 attacks on the city, and went on to be one of the most popular shows of the season running for almost 1000 performances. The show satirizes everything from big businesses to the government and the role of the state in private life. The show also satirizes the genre of musicals themselves, using two internal narrators to set up the plot and let the audience know about key moments before they arrive. The musical is popular in the USA although no production has happened in the UK. 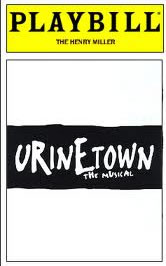 Officer Lockstock is assisted by the street urchin Little Sally in introducing the audience to the show. They tell about a twenty seven year drought that created such a water shortage that private toilets are no longer available. All toilet activity is now regulated and done in public toilets so it can be controlled by a megacorporation known as Urine Good Company (UGC). People have to then pay to pee, and failure to do so ends up with the offender being sent to a penal colony known as ‘Urinetown’.

A poor community huddle together at the town’s dirtiest urinal, Public Amenity #9 which is run by Penelope Pennywise and her assistant Bobby Strong. Strong’s father does not have enough money to pee, and Bobby begs to let him have a free turn just once. Penelope refuses and he urinates on the street and is arrested by the Officers who escort him to Urinetown. At the UGC headquarters, CEO Caldwell is discussing fee hikes with the Senator. His beautiful daughter Hope Cladwell works at the office as a copy girl.
As the officers begin to discuss the journey to Urinetown and the mental torture it presents, Hope notices Bobby and the two fall instantly in love. They sing about their dreams for a new, free world.

Cladwell’s assistant announces the fee hikes across the public urinals and Bobby argues that the laws are wrong. He leads a rebellion based on the slogan ‘pee-for-free’. Cladwell is informed of the mini revolution and Hope is distressed at his attempts to squash Bobby. He tells his daughter that the poor need to remain repressed or they will rise up. As the Officers arrive at the amenity, Bobby realises that Hope is Cladwell’s daughter, and the rebels kidnap her as they rush off to hide in an underground sewer.

The second act opens as the rebels hold Hope for ransom. The police continue to look for her and the hideaway. Everyone begins to wonder what Urinetown actually is and everyone has their own opinions of what it is like there. As the pressure builds, Bobby reminds them of their mission of freedom with a rousing gospel song. Pennywise bursts in on the action to escort Bobby to the UGC headquarters, warning the poor that he will be escorted to Urinetown. Bobby and Hope part ways but promise each other that everything will be alright.

Bobby is offered a large amount of money to free Hope in return for him convincing the poor that the fee hikes are necessary. He refuses, and Pennywise and the other officers begin to see the corrupt evil in Cladwell’s government. Bobby is taken to the top of the building and realises that Urinetown doesn’t exist – instead everyone is just killed. He is thrown off the top of the building to his death.

Little Sally informs the rebels of his last words ‘tell her I love her’ which inspires them to continue to fight. As they prepare to kill Hope, Pennywise arrives and offers herself. Together they march on the UGC buildings and send Cladwell to Urinetown to avenge Bobby’s death. They rename the toilet in his honour, and allow anyone to pee anywhere for free.

They soon realise however that this utopia cannot last as the water supply dries up. The population continue to die as they realise that they have become the imaginary Urinetown themselves.