Mamma Mia! is the smash-hit musical based on classic songs from pop band ABBA. Continuing to play to packed-out audiences in the West End, Mamma Mia! combines the hit songs with a heart-warming story of Sophie, a young girl about to be married. Wishing to be walked down the aisle by her father, she first needs to find out who her father is, and invites them all to her mother’s tavern on a Greek island. Ever-popular, Mamma Mia! is also a 2008 film starring Meryl Streep, including the famous songs such as “Waterloo”, “Dancing Queen” and “Voulez-Vous” amongst many, many more. A popular show for ABBA fans, Mamma Mia! continues to huge success, combining some smashing songs with a story of family and true love. 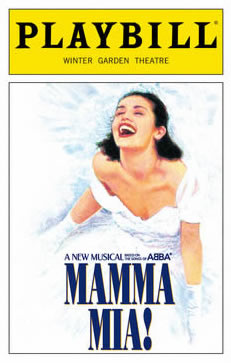 ABBA’s legendary musical is an all-night celebration of their hits, alongside a moving story of friendship, family and love.

Set on an exotic Greek island, Mamma Mia! follows 20 year-old Sophie, who is preparing to marry her fiancé Sky. More than anything, Sophie wishes to be walked down the aisle by her father, but must first find out who he is. In her mother’s old diary she discovers three men who could fit the description. Inviting Sam, Bill and Harry to her wedding, she hopes to figure out who it is when she meets them – the only problem is that she hasn’t quite told Donna, her mother, that they are coming!

Donna’s best friends Tanya and Rosie arrive at the island for the celebrations and reminisce about their prior lives as girl group “Donna and the Dynamos”. Sophie’s potential fathers also arrive and she tells them not to tell Donna that she invited them. Donna sees her ex-lovers and leaves in tears. Meanwhile, Sophie thought that she would recognise her father on seeing him and attempts to tell Sky, but he tells her that he is the only man she could ever need.

At Sophie’s hen party, Donna and the Dynamos make a reappearance and perform “Super Trouper”. Sam, Bill and Harry walk into the party and the guests persuade them to stay. Sophie pulls Sam away for a chat, but when he asks why he has been invited, Sophie runs away to talk to Harry. Harry asks if he is Sophie’s father, and she tells him about inviting them all. When she talks to Bill, it is revealed that he has an Aunt Sophia who left all her money to Donna’s family. Bill finds out that Donna built the Greek tavern with money she inherited from a friend, and both think that means Bill is Sophie’s father.

Sophie asks Bill to walk her down the aisle, but he wants to talk to Donna first. No one yet knows that not even Donna knows who Sophie’s father is. Sophie pleads with the three not to tell Donna anything and they agree. After the party, Sam pulls Sophie aside and tells her that he thinks he is her father and promises to walk her down the aisle. Harry approaches Sophie and offers the same thing, also convinced that he is her father. Sophie leaves the party, more confused than ever.

Act II begins with Sophie having a nightmare that her three fathers fight over the right to walk her down the aisle. Sophie is upset and Donna assumes that she wants to cancel the wedding. Sophie tells her that her own children will never grow up without knowing who their father is and storms from the room. When she leaves, Sam enters and tries to tell Donna that Sophie may have invited them. Donna reveals that she has always loved Sam, despite him leaving her to get married.

Back at the beach, one of the bartenders, Pepper, begins to flirt with Tanya, and she rebuffs him with “Does Your Mother Know”. Sky discovers that Sophie invited Sam, Harry and Bill and accuses her of only wanting a large white wedding so that she can find out who her father is. He leaves, hating that she kept a secret from him. Sam enters and attempts to give Sophie some fatherly advice, telling her of his own failed marriage.

Harry offers to pay for the wedding, and Donna and Harry reminisce about their fling. Donna helps Sophie dress and cannot believe how grown up she seems. She admits that her own mother disowned her when she was pregnant, and the pair reconcile, with Sophie asking Donna to walk her down the aisle. Sam once more appears and Donna asks him to leave, telling him that he broke her heart when she found out that he was engaged. It is revealed that the two are still very much in love.

As Rosie makes final preparations for the wedding, she comes across Bill, who is upset not to be walking Sophie down the aisle. Bill affirms his commitment to single life, but Rosie urges him to change his mind, with the pair ending up locked in a passionate embrace. As the wedding begins, Donna walks Sophie down the aisle and tells everyone that Sophie’s father is present, realising that it was her who invited them all. Everyone agrees that it really doesn’t matter who the father is, as Sophie loves all three. Harry is revealed to be in a committed gay relationship.

Sophie admits she is not ready to be married, and Sky agrees. Sam proposes to Donna and finds out that he called off the wedding to his fiancé because of Donna. Donna accepts his proposal and Sky and Sophie depart on a round-the-world trip. Mamma Mia! ends with a rousing reprise of “Mamma Mia!”, “Dancing Queen” and “Waterloo”, with Donna and the Dynamos appearing in ABBA style costumes.

2000 Olivier Awards: Best Performance in a Supporting Role in a Musical (Jenny Galloway)