Into the Woods had its Broadway première in 1987, featuring a score by Stephen Sondheim and book by James Lapine. The show has gone on to be one of the most revived of the composer’s work in both New York and London, with countless regional and amateur productions around the world. Loosely based on Bruno Bettelheim’s ‘The Uses of Enchantment’,  the show weaves together a collection of Fairy Tale characters who come together to journey ‘into the woods’ to find their ‘ever after’. As the characters finish Act One with the resolution of their tales, Act Two highlights the problems that occur when their wishes come true. A highly moral yet funny musical ‘Into the Woods’ is one of Sondheim’s most accessible musicals and an enjoyable show for all the family. 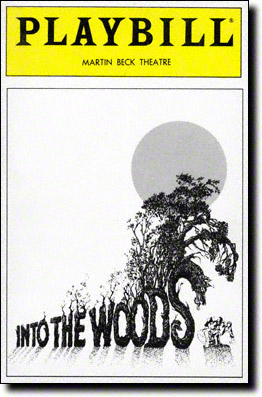 The Narrator begins the show introducing the characters of Cinderella, Jack, and The Baker and his Wife who all wish for different things. In an extended “Prologue” we meet each of the characters and understand why they want to journey “Into the Woods” to get their wish. Cinderella is taunted by her Stepmother and sister Lucinda and Florinda. She calls on the help of the birds with her chores, and is inspired to visit the grave of her mother to pray, so she can make her way to the Festival. Jack is made to journey into the woods by his Mother to sell his cow for whatever they can make. Despite it being his only friend in the world, his mother is in desperate need of money. The Baker and his wife are desperate to have a child, but cannot conceive. The Witch appears and tells them that she laid a curse on their house after the Baker’s father stole from her garden which means they will never have children. To reverse the spell they must journey into the woods to find three items; the slipper as pure as gold, the cow as white as milk, the cape as red as blood and the hair as yellow as corn. The Baker sets off to get these items and is followed by his wife. Red Riding Hood journey’s into the woods to visit her granny who is sick in bed.

Cinderella prays at the grave of her mother for her wish to be granted. A gown and golden slippers fall from the sky and she rushes off to get her wish. A mysterious Man mocks Jack for selling his cow and tries to warn him about the dangers of the woods. Little Red Riding Hood is stopped on her journey by the Wolf who teases her, before she dashes off (“Hello Little Girl”). The Baker spots her cape and runs after her. Jack and his cow enter and The Baker’s Wife convinces him that he must sell his cow to them for 5 beans. She lies and tells him they are magic beans and they have their first item on the list, (“I Guess This is Goodbye/Maybe They’re Magic”). The Witch goes to visit her daughter Rapunzel who she has locked away in a tower to preserve her youth and beauty. As she calls up to her to climb her hair, they share a moment together, (“Our Little World”).

At Grandmother’s House, Little Red finds the Wolf instead of her granny. She is eaten up, but saved by the Baker who kills the Wolf. In return she gives him her red cape. Little Red sings about her experience (“I Know Things Now”). Jack’s mother scolds her son and angrily throws the beans away. Cinderella flees from the Festival, running from the Prince and his Steward. The Baker’s Wife spots her slippers and quizzes her about the ball, (“A Very Nice Prince”) before chasing after her to get the slippers, letting go of the cow at the same time. As “The First Midnight” chimes, everyone delivers their philosophy lost in the woods, as time begins to tick by for the Baker and his Wife.

Jack has climbed the beanstalk to the land of the Giants and describes his experience, telling his mother about the “Giant’s in the Sky”. He tries to buy back his cow from the Baker but he realises it is now lost. Cinderella’s Prince and Rapunzel’s Prince meet in the woods to compare notes on their relevant princesses and the “Agony” their love presents. The Baker’s Wife fools Rapunzel to let down her hair which is as yellow as corn, as the Mysterious Man gives the Baker the cow back.

The Baker’s Wife meets Cinderella again and misses out on the slippers once again. The Baker and his Wife discuss how the quest has brought them closer together and admit they need to work together to find the items (“It Takes Two”). Jack tries to exchange a hen that lays a golden egg for his cow, but just as the “Second Midnight” chimes, the cow dies. The Witch realises that Rapunzel has been visited by a Prince and punishes her by cutting off her hair (“Stay With Me”). Cinderella has smeared pitch on the steps of the palace to stop her now nightly pursuit as she flees from the Festival (“On the Steps of the Palace”). The Baker’s Wife tries to give her magic beans for her shoes but Cinderella throws them away. An almighty crash is heard and Jack’s Mother screams that a dead giant has fallen from the sky. The Baker and his Wife assemble with the items to give the Witch, with a fake cow covered in flower. As the potion fails, she brings the original cow back to life and feeds all the items to the cow. Jack milks his cow and gives the Witch the potion, and she becomes young and beautiful once again.

Cinderella’s Prince travels across the land to find the girl whose foot fits the slipper. Arriving at Cinderella’s house her Stepmother forces it on Lucinda and Florinda’s feet by chopping off their toe and heel. As the Prince notices the blood, and with some help from Cinderella’s Mother at the grave, he realises it is Cinderella who he fell in love with. At their wedding, birds fly down and peck out the stepsister’s eyes, making them blind. Rapunzel’s Prince falls from the tower into a patch of thorns and is blinded, and Rapunzel meets him whilst wandering through the desert with twins. Her tears cure his blindness and they live happily together. As the whole cast come together to celebrate their “Ever After”, the narrator warns that the story is to be continued, as a beanstalk grows into the sky.

Act Two opens with a similar Prologue to the first, where we see each of the characters after their ‘happily ever after’. Cinderella is fed up of being married to a Prince, Jack misses his kingdom in the sky despite his riches and The Baker and his Wife are stressed by the arrival of their child and the lack of room. Everyone is knocked over by a large crash and everyone heads into the woods to investigate. (“So Happy/Act II Prologue”). The woods have now become a much scarier place thanks to the Giant which is now on the loose. The Princes are both bored with their lives and have fallen in love with Snow White and Sleeping Beauty respectively, who bring them a similar level of “Agony (reprise)”.

As everyone comes together lost in the woods, the voice of the female giant booms down as she is looking for Jack who killed her husband. The group begin to regret their actions and offer the Narrator as a sacrifice. The giant realises she has been tricked and promises to return and destroy the kingdom. As she leaves, she steps on Rapunzel and the Witch is distraught, (“Witch’s Lament”). The Witch goes off in search of Jack.
The Baker finds Cinderella at the now ruined grave of her mother. They decide to stay together for comfort, along with Little Red and the baby.

The Baker’s Wife runs into Cinderella’s Prince who charms her and they enjoy a “Moment in the Woods”. As the Prince leaves her, she reflects on her decision and as she faces the moral dilemma, she is stood on by the Giant. The Witch finds Jack and they all argue about whose fault it is that the Giant is here, (“Your Fault”). The Witch is furious and throws away all the remaining magic beans and vanishes, (“Last Midnight”).

The Baker is upset at losing his wife, but the spirit of his father visits him and they agree to have “No More” trouble in the woods. Together they all hatch a plan to bring down the Giant by using the birds to peck out her eyes. The Baker and Cinderella comfort Jack and Little Red, who are scared by the happenings in the woods, (“No One is Alone”). The Giant falls for their trap and crashes to earth.

All the characters re enter and tell what they have learnt, and The Baker’s Wife’s spirit urges her husband to teach their child and tell them what he knows. The Witch returns and warns them that “Children Will Listen”. They all agree that in life, we all have to journey “Into the Woods” to get our wishes as the curtain falls.