Carrie: The Musical is one of the most infamous musicals of all time, after opening on Broadway and closing after only 5 performances. Based on the Stephen King novel of the same name, the musical features a book by Lawrence D. Cohen, music by Michael Gore and lyrics by Dean Pitchford. The show originally opened in Stratford in a production by the RSC, before transferring to Broadway in an $8million production. After unanimous negative reviews, investors pulled their money out of the project, forcing it to close. The show has had a number of revivals around the world, with an official 2012 off-Broadway revival receiving better notices than the original. 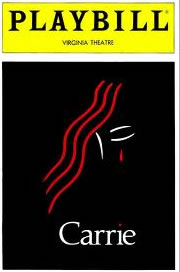 the Novel by Stephen King

The show begins in a high school gym. The gym teacher, Miss Gardner, is leading her girls’ gym class in a strenuous workout, encouraging the girls to “work, work, work” and “burn, burn, burn!” After class, the girls head to the locker room and have fun teasing a less attractive, plump girl named Carrie White. The girls start to shower while talking about boys and their plans for the upcoming prom. Their excited conversation is cut short by sudden screams from Carrie. “I’m bleeding!” “I’m dying!” The other girls realize Carrie has started her period and start taunting her. “Carrie’s got the curse!” Hearing the commotion, Miss Gardner rushes in and slaps the hysterical Carrie to calm her down. Carrie stops screaming as the light bulb overhead explodes. Realizing that Carrie doesn’t understand what is happening to her, Miss Gardner sends the other girls out of the locker room. On the way out of the gym, Sue and Chris talk about what just happened in the locker room. Sue is already feeling remorseful for her part in the incident but Chris calls Carrie “Scary White.” Carrie is hurt by their name-calling and teasing and dreams of a day she’ll “make them sorry…for teasing Carrie.” Carrie’s momma Margaret is praying when Carrie arrives home. Carrie joins her mother in prayer for a few minutes and then explains what happened at school in the shower that day. Momma tells Carrie that the blood is a sign of her sin and tells her to “pray for forgiveness.” She opens a trap door to the cellar and forces a frightened Carrie down there to pray. That night, many of the high school kids are at the drive-in, including Sue and her boyfriend Tommy and Chris and her boyfriend Billy. Sue tells Tommy that she’s still upset about what she and the other girls did to Carrie in the locker room while Chris complains about Carrie to Billy. While the other kids are at the drive-in, Carrie and Margaret are home praying. Magraret prays for the strength to help her daughter while Carrie, depressed, questions God’s love for her. At school the following day, Miss Gardner tells the girls they must all apologize to Carrie. Sue and the other girls tell Carrie that they are sorry but Chris refuses. Upset, Miss Gardner tells Chris that she will not be allowed to go to the prom. Chris promises that she’s “gonna be sorry!” The rest of the girls leave and Carrie is left alone with Miss Gardner, who encourages Carrie to dream about her Prince Charming. Still upset over the way Carrie has been treated, Sue asks Tommy to take Carrie to the prom instead of her and he reluctantly agrees. At the same time, Chris asks Billy to help her get revenge on Carrie and he agrees to go along, in return for her “appreciation.” Tommy surprises Carrie by knocking on her door and asking her to go to prom. Confused, Carrie asks “why me,” but eventually agrees to go with him. Excited, Carrie tells her momma about the prom but Margaret tries to convince Carrie that all boys are the same: “demons”. She wants Carrie to repent and pray for forgiveness but Carrie has found new strength and refuses. She uses her supernatural powers to pin Margaret in her chair and sets her own hands aflame, telling her momma that “nothing you can say or do will ever stop me again.”

Act II begins on a pig farm, where Chris, Billy, and several of his friends, are on a mission. For their planned revenge on Carrie, they kill pigs and collect their blood. Back at the high school, Sue is confronted by girls who are upset that Carrie is going to the prom. “You’re not one of us anymore, Sue,” they tell her. Sue believes she is doing the right thing but realizes that doing the right thing is not always easy. Getting ready for the prom, Carrie dreams about her date and finally seems to be happy. In a more positive display of her special powers, she sends her dress, shoes, and hairbrush dancing through the air. Margaret tries one more time to convince Carrie not to go to the prom, promising “we’ll talk, we’ll laugh, and I’ll sing to you.” But Carrie doesn’t listen – she still has her dream that “they might like me.” Tommy arrives and they leave for the prom, leaving Margaret alone . Tommy and Carrie arrive at the prom and everyone is surprised at how beautiful Carrie is. Miss Gardner is there as a chaperone and talks to Carrie about how it feels to be in love. Carrie’s nervous about dancing with Tommy but he finally convinces her to go out on the dance floor with him. It’s time to vote for the prom queen and king – Tommy wants to vote for them but Carrie resists. Tommy finally convinces her and they win! Tommy and Carrie are the new king and queen of the prom. Tommy and Carrie get on the stage while the other students applaud and start to sing the school song. Suddenly, Billy and Chris (who have snuck into the prom) rush toward the stage and Billy dumps a bucket of pig’s blood over Carrie. Carrie goes crazy, remembering the names they have called her and how they all laughed at her. She tells them to “pray for your salvation” and then gets her revenge by using her telekinetic powers to collapse the gym roof, killing them all. Carrie goes home, covered in blood, and falls into her mother’s arms. Margaret comforts her daughter. Unexpectedly, Margaret pulls out a knife and stabs Carrie, delivering a fatal wound. Carrie uses her supernatural powers one last time and gives her momma a last, fatal touch causing her to fall dead. Carrie, close to her own death, crawls away and is comforted by Sue – the only student who wasn’t at the prom.