Something Rotten! is the hilarious, brand-new musical directed and choreographed by theatre legend Casey Nicholaw (The Book of Mormon, Aladdin). Set in the 1590’s, Something Rotten! follows brothers Nick and Nigel as they try to top Shakespeare’s plays with their own acting troupe. When a soothsayer mistakes Hamlet for Omelette the Musical, chaos ensues, resulting in a very funny conclusion. Premiering on Broadway, the musical received mixed views from audiences and critics alike, and came away from the Tony Awards with only one win, despite nine nominations. A London transfer is predicted for the future and the show is also embarking on a US tour. 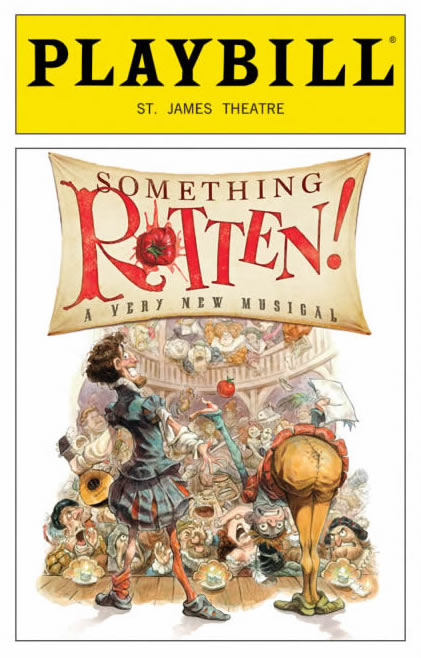 Set in the 1590’s, William Shakespeare is a local celebrity, known as “The Bard” and loved by all. The Minstrel narrates the inventions and customs of the Renaissance and introduces Nick Bottom and Nigel, who run a theatre troupe. Rehearsing for Richard II whilst Shakespeare is opening Romeo and Juliet, Lord Clapham (a patron who raises funds for the troupe) arrives and announces that Shakespeare is also going to be doing Richard II. Outraged, Nick says that Shakespeare has already done Richard III and should not be going backwards. Ranting about his hatred for Shakespeare, Lord Clapham leaves, threatening to cut the troupe off unless they have a new play tomorrow.

On the way home, Nick encounters Shylock the Jew, who wants to help the troupe. Unfortunately, Shylock’s Jewish background would be illegal. Back at home, Bea, Nick’s wife, serves up dinner and ensures they are saving for a better life. She claims that she could help out with the troupe and goes out to do “jobs meant for men”, despite Nick’s protestations. As Nigel sleeps, Nick realises how much he hates Shakespeare and wishes there was a way to top him. Stealing money from his and Bea’s moneybox, he finds a soothsayer Nostradamus, who says that the next big thing in theatre will be a musical.

Later, Nigel meets Portia, a Puritan and daughter of Brother Jeremiah. Nick tells him he should not pursue her as she is Puritan. Nick tells Nigel about the musical idea, but tells him he thought of it by himself. Nigel wants to do “The Brothers from Cornwall”, but Nick says it should be “The Black Death”. Lord Clapham arrives to watch the troupe perform the opening song, and hates it. Nigel begins to write a new play but is distracted by Portia. Soon, an invitation arrives for Nigel to go to “Shakespeare in the Park”. He tells Portia that he sent one of his sonnets to the Bard for feedback, and is now invited to his party. He asks if Portia will be his plus one.

At the after-party, Portia gets drunk and Shakespeare asks to read more of Nigel’s poems. Nick runs in and yells at the Bard for trying to steal Nigel’s work and at Nigel for going to the party. Brother Jeremiah enters to find a drunk Portia and admonishes her and Nigel. Nick goes back to Nostradamus with his remaining money. He asks him to predict Shakespeare’s next hit, and Nostradamus sees “Hamlet”, which he pronounces “Omelette”. He sees the main character as a Danish prince, but only the Danish part, which Nick takes to mean a Danish pastry. Getting excited about future dreams, he goes into a fantasy where he wins over Shakespeare.

Act II begins with the Minstrel, who recaps the stress the Bottom brothers and Shakespeare face. A spy tells Shakespeare that Nick and Nigel are trying to steal his latest play, so he jumps at the chance to find out what it is. He disguises himself as Toby Belch and goes to audition for the brothers’ troupe. Meanwhile, the troupe are practising Omelette the Musical and Shylock has become their new investor and producer (although they have no name for that yet). Some of the actors are suspicious of Nostradamus, but Nick says he is a fellow actor. Shakespeare auditions and is hired, surprised to find out their musical is about eggs.

Nigel sneaks away to meet Portia, reading her another love poem. He worries about their future, but she reassures him that everyone will soon change their minds. He tells her he does not like Omelette the Musical. Brother Jeremiah arrives and takes Portia away to be shut in a tower for her sins. Saddened, Nigel becomes inspired to write a whole new play, which turns out to be Hamlet.

Nigel goes to the theatre the next day to tell Nick he does not like Omelette the Musical and is writing something else. Shakespeare takes this as an opportunity to get his hit play. On the street, Bea finds Nigel and tells him to trust Nick. Nick himself is having mixed feelings about Omelette, but learns that the whole town has lined up for tickets. Performing a huge number, Shakespeare reveals himself and sues the brothers. Quickly the troupe discover that Nostradamus is a soothsayer, and everyone is horrified.

At the courtroom, Shylock, Nigel, Nick and Nostradamus are being tried and Nick is sentenced to be beheaded. Bea enters, disguised as a lawyer, and forces Nick to confess that he stole from the moneybox and that he should not be beheaded as he has already lost his head. She makes a deal with Shakespeare that they will all be exiled to America. Portia arrives, having escaped, and joins the Bottoms in exile. Arriving in America, Nick hears about the opening of Hamlet. Nostradamus replies “I was this close”.