Fiorello! is one of only 8 musicals to win the Pulitzer Prize for Drama due to its significant historical content. The show concerns New York City mayor Fiorello LaGuardia, a Republican who governed around the time of the Great Depression. The book by Jerome Weidman was based on the 1955 work ‘Life With Fiorello’ by Ernest Cuneo. The show features music by the creative team of ‘Fiddler on the Roof’, Sheldon Harnick and Jerry Bock. The original Broadway production was directed by George Abbott and premièred in 1959. The musical is yet to play in London’s West End. 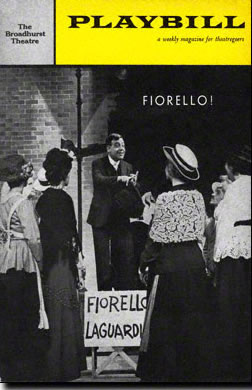 The Mayor of New York City Fiorello LaGuardia opens the show reading comic books over the radio as a newspaper strike takes over the city. The clock turns back to 1915, one year into the First World War. We see LaGuardia in his law office where clients are awaiting the chance to speak with him face to face. His clerks tell the crowd that they will all have chance to speak with him, regardless of whether or not they can afford to pay for his services, (“On The Side of The Angels”). Meanwhile his secretary Marie and her best friend Dora are hearing about drama that has unfolded due to the strikes, as Thea Almerigatti, the head of the women shirtwaist strikers has been arrested. Fiorello calms down the situation and promises to help. One of the district leaders Ben plays a game of poker with his politically minded friends (“Politics and Poker”) as Marie announces that LaGuardia is a potential Congressional candidate and is standing up to the corrupt politics of Tammany Hall. Fiorello invites Marie to dinner after the pair spend time together, but as Thea arrives having being released from prison he breaks off the plan to help her with her strategy. Marie feels rejected and asks herself why she cares so much for a man who does not care for her, (“Marie’s Law”).

The next year we see Fiorello in his campaign to reach Congress as he promises to break the politically tyranny of Tammany Hall (“The Name’s LaGuardia!”). He wins the election (“The Bum Won”) and grows closer to Thea. A Year later he proposes to Thea before enlisting in the Air Force as America joins the War in Europe. He bids an emotional farewell to Marie, (“Till Tomorrow”). We see his involvement in the war through a series of projections, and as the war ends he returns “Home Again” where Marie and Thea are both glad to see him. Thea has agreed to marry him and Marie is left alone, comforted only by Morris, the office manager.

Act Two opens in 1929 as LaGuardia runs for Mayor of New York. Thea is now happily married and asks “When Did I Fall in Love?” In Dora’s home a group of competitors meet and plan to overthrow Fiorello, killing him at one of his public appearances. Dora overhears and rushes to tell Marie. Fiorello’s campaign for Mayor is going badly, as Ben is fired and Thea’s health begins to deteriorate. She dies and Marie has to tell Fiorello the news. The race for Mayor is won by rival Jimmy Walker, but Fiorello is inspired by the death of Thea and continues his campaign.

In 1933 Ben is once again playing poker with his friends (“Little Tin Box”). Marie is desperate to get married, and quits her job saying she will marry “The Very Next Man” who asks. She begs Ben to help Fiorello with his upcoming election, and with his help Fiorello manages to win the Mayoral race.