Company features a book by George Furth and music and lyrics by Stephen Sondheim. The musical is one of the pair’s most successful shows, and the original production was nominated for 14 Tony Awards, although it only won 6.   The show features a 35 year old single man Bobby who lives in New York and is unable to commit to marriage. Through a series of vignettes we see each of his friends showing different sides to their marital relationships. 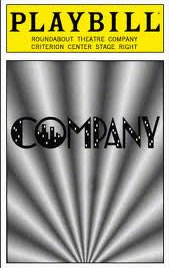 It’s 1970’s New York City, and perpetual bachelor Bobby is celebrating his 35th birthday with his married friends, who’ve gathered in his fabulous Upper East Side apartment. Though they all encourage him to finally settle down, Bobby remains steadfastly single. In a series of vignettes, he visits each couple and explores what marriage is all about.

Harry and Sarah are a friendly, middle-aged couple who are some of Bobby’s best friends. Both have their vices – Harry was arrested for public intoxication and has allegedly given up drinking, and Sarah’s new karate craze has failed to combat her food addiction. Joanne and the other couples sing “The Little Things You Do Together” while Sarah shows Harry some of her karate moves. When Sarah goes to bed, Bobby asks Harry if he’s sorry he get married, to which Harry replies that he is always “Sorry-Grateful.”

Bobby’s other friends, Peter and Susan seem like the perfect couple, but they reveal to Bobby that they plan to get divorced. Bobby is even more shocked as they each seem to be elated about separating and are getting along fine.

Next, Bobby visits Jenny and David, and with their children asleep upstairs they decide to smoke marijuana. Jenny gets a bit silly but snaps back to reality when she asks Bobby when he will finally get married. Bobby says he just hasn’t met the right girl yet, even though he’s dating three at the minute, Marta, April, and Kathy, who lament his playboy ways (“You Could Drive a Person Crazy”). Jenny asserts that it’s time for Bobby to grow up. The married men enjoy living vicariously through Bobby’s active sex life (“Have I Got a Girl for You”), but he is starting to realise that “Someone is Waiting” who will make him end his bed-hopping ways.

Bobby meets up with his three girlfriends while Marta describes “Another Hundred People” flooding the already crowded city of New York. April is a ditzy flight attendant who lacks substance, while Kathy, the one that got away, is moving home to get married after finally growing tired of Bobby’s refusal to commit. Marta is a young, free-spirited girl whose greatest love seems to be New York itself.

On their wedding morning, Amy and Paul are getting ready with the help of Best Man Bobby. Amy is getting cold feet, to the point that she declares she is not “Getting Married Today” to a heartbroken Paul. After Bobby makes an impulsive and awkward marriage proposal of his own, Amy realises her mistake and runs off to catch Paul. Bobby thinks he wants to get married, but still doesn’t want all the responsibility that entails (“Marry Me a Little”).

The couples all reflect on how much they need Bobby in their lives (“Side by Side by Side/What Would We Do Without You?”). Bobby invites April over to his apartment and promptly seduces her, while the wives worry that he is all alone (“Poor Baby”. The next morning, April needs to get up for her flight to “Barcelona,” but decides to spend the whole day with Bobby, much to his chagrin.

With Marta in tow, Bobby heads back to Peter and Susan’s, where he finds them happily divorced, but still living together. When the girls head to the kitchen, Peter asks if Bobby has ever had a homosexual experience. When Bobby admits that he has, Peter asks if they could ever be together. Bobby mistakenly assumes Peter is joking and laughs the whole conversation off.

Bobby gets drunk at a nightclub with Joanne and Larry, the oldest of his friends. Joanne has been overserved and delivers a scathing rebuke of “The Ladies Who Lunch,” despite realising she is one of them. Larry is embarrassed and heads to the bathroom, and Joanne takes the opportunity to make a pass at Bobby. Taken aback, he again tries to laugh it off, but Joanne forces him to confront the fact that he is ultimately unfulfilled as a single man. As Larry and Joanne leave, Bobby realises that he does want someone to share in the ups and downs of “Being Alive.”