The Wiz is a musical adaptation of the classic Wizard of Oz story, based on the book by L. Frank Baum. Featuring music and lyrics by Charlie Smalls and a book by William F Brown, the show uses the context of African-American culture to shed a different light on the classic story. The original production featured an all-black cast and was one of the first mainstream Broadway musicals to do so. The show became popular on Broadway, and a film version was later created staring Diana Ross and Michael Jackson. Although this was a commercial and critical failure, it became a cult classic and allowed the musical to live on through to the next generation. The show has been revived numerous times although a full scale London production is yet to be produced. 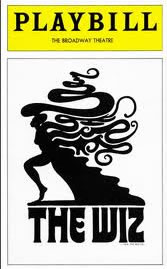 The Wonderful Wizard Of Oz by L. Frank Baum

Dorothy lives on a farm in Kansas with her Uncle Henry, Aunt Em, and dog, Toto, but she wants to see more of the world, despite her family’s protestations that she has everything she needs at home. An unexpected “Tornado” lifts the house with Dorothy and Toto inside it. The house lands in Oz, where Dorothy meets Addaperle, the Good Witch of the North. Dorothy’s house has landed on the Wicked Witch of the East, killing her and freeing the Munchkins who she had enslaved.

Dorothy wants to return home, and Addaperle advises that she visit the Wizard of Oz, as he will be the only person who could help (“He’s the Wizard”). She gives Dorothy the Wicked Witch’s silver shoes to protect her from danger, and advises her to follow the yellow brick road to the Emerald City where the Wizard lives. On the way she meets a scarecrow in search of a brain, a tin man who wants a heart, and a cowardly lion who lacks courage. Together, they “Ease on Down the Road” to ask the Wizard for help.

They finally see the Emerald City in the distance, but a field of poppies put Dorothy and the Lion to sleep. Not being mortals, the Tin Man and the Scarecrow are unaffected and together with some Field Mice they move Dorothy and the Lion to safety. They arrive at the Emerald City and are forced to wear green-tinted glasses. The inhabitants are snooty and look down at the group until they spot Dorothy’s shoes and send them straight to the Wizard.

The Wizard appears in a variety of forms, each one more terrifying than the last (“So You Wanted to See the Wizard”). Dorothy and her friends ask him to grant their wishes, and he agrees only if they kill the Wicked Witch of the West, Evillene. The group feel the task is impossible, but nevertheless they set off in search of her. Evillene has enslaved the Wikies, and when she sees Dorothy and her companions are coming, she sends her winged “Funky Monkeys” to kill them. They pull the stuffing out of the Scarecrow and bash the Tin Man on rocks, but because of Dorothy’s shoes they do not dare to hurt her and bring her and the Lion to the Witch.

Evillene forces Dorothy to clean the castle, and begins torturing the Lion. Finally, Dorothy is fed up and throws a bucket of water at Evillene. To her surprise, the witch melts into nothing. The Winkies are ecstatic at being freed and repair the Tin Man and Scarecrow (“Everybody Rejoice”).

The group heads back to the Wizard, who says he won’t grant their wishes after all. The Lion is furious and tries to attack him. He accidentally knocks over a screen which reveals the Wizard is just an ordinary man. Everyone is furious, but the Wizard assures them that they have already shown the values they sought to possess in their adventure (“Believe in Yourself”). He agrees to fly Dorothy back home in his hot air balloon, but at the last moment the balloon gets loose, leaving Dorothy and Toto behind.

Addaperle reappears to advise Dorothy to seek Glinda, the Good Witch of the South, who may be able to help her. Glinda is a powerful sorceress, but tells Dorothy she has always had the power to go home if she believed it (“If You Believe”). After saying goodbye to her new friends, she clicks her heels three times and returns “Home.”