Mack and Mabel features a book by Michael Stewart with music and lyrics by Jerry Herman, and features the Broadway standards ‘I Won’t Send Roses’ and ‘Tap Your Troubles Away’. The show follows the relationship between film director Mack Sennett and Mabel Normand in the roaring twenties and the early days of the Hollywood film studios. The show has had many successful outings on Broadway, including benefit concerts starring actors such as Robert Preston, Bernadette Peters and Francis Roufelle. A recent London revival at the Southwalk Playhouse received rave reviews for its simplicity and casting. 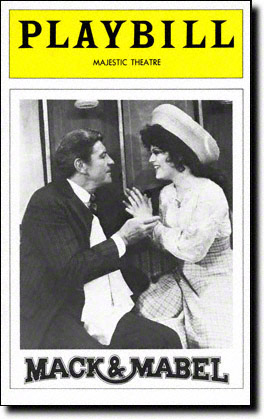 In 1938, Mack Sennett revisits his old film studio where he made a number of successful silent movies. Seeing a new talking picture being filmed, Mack reminisces about his career and the golden era of silent films, when “Movies Were Movies.”

The musical flashes back to 1910, when Mack first meets Mabel, a waitress at a delicatessen. The actress Mack is with, Lottie, is unable to pay for her sandwich, and Mabel tells her off. Impressed by her histrionic reaction, Mack thinks she has what it takes to become an actress and offers her a role. She turns him down at first, but then becomes starry-eyed by her potential good fortune (“Look What Happened to Mabel”).

Mabel manages to become a major film star, and she and Mack manage to move to a larger studio. Lottie and the rest of the crew are thrilled that they’ve made it to the “Big Time.” Mabel develops feelings for Mack, but he is too busy to think about romance (“I Won’t Send Roses”). Still, they sleep together, but when Mack leaves in a hurry, Mabel realises he won’t be with her for the long haul.

Mabel wants to star in a dramatic role, but Mack only wants to make comedies (“I Wanna Make the World Laugh”). Mabel meets a different director, William Desmond Taylor who falls for her and agrees to direct her in a serious movie. Mack tries to convince her that the project is a bad idea, but after they argue Mabel decides she does not want to be with him anymore and, in fact, wants to be “Wherever He Ain’t.” Mack convinces himself that Mabel is replaceable, and that there are “Hundreds of Girls” he can make just as successful.

Mabel decides to return to Mack’s company and everyone lights up “When Mabel Comes in the Room.” Mack agrees to direct her in a drama after all, but he cannot help himself and tries to add his own comic flair. Mabel is livid and decides to go back to Taylor, who encourages her to take heroin to forget all about Mack. She decides to try it, and though she is heartbroken over Mack she decides “Time Heals Everything.”

Mack’s career takes off, but Mabel’s life spirals out of control and she becomes a drug addict. When Taylor is murdered, she becomes the number one suspect. Mack finally decides that he wants to reunite with Mabel, but unfortunately she has died in the meantime. Mack tries to imagine how their lives could have been different (“I Promise You a Happy Ending”)