Wicked is one of the biggest musicals of recent years. After a lengthy tryout period around the USA, the show opened on Broadway in late 2003. The show continues to play to packed houses in both New York and London, where it has set many records for box office gross receipts. Despite its success, the show did not win either the Tony Award or Olivier Award for Best Musical, but has won dozens of awards voted for by members of the public. The show has developed a number of dedicated fans around the world, and many people see it over and over again. Based on Gregory Maguire’s novel of the same name, the show acts as a prequel to the famous ‘Wizard of Oz’, developing the story to look at it from the perspective of the Witches. Stephen Schwartz’s score has become one of his most popular, and the songs have been released in the charts as well as featured on numerous TV shows and films. Although Universal Pictures own the rights to the film version, no official announcement has been made about a big screen adaptation, although many fans hope it will be in the near future. 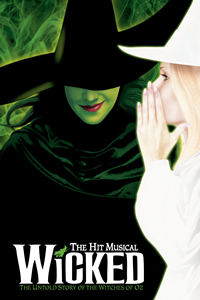 ”Wicked: The Life and Times of the Wicked Witch of the West ” by Gregory Maguire

The show begins as the citizens of the magical land of Oz are celebrating the death of the Wicked Witch of the West. Glinda arrives and confirms that the witch has indeed melted. One of the crowd asks Glinda if she knew the Witch and she hesitantly launches into a story that explains her conception through an affair between a Munchkin Lady and a mysterious stranger who courts her with a bottle of green elixir. Glinda tells the crowd to try and sympathise with her fate and begins a flashback that tells the events of how she and Elphaba, the Witch, met.

Glinda takes us back to Shiz University where Elphaba sticks out amongst her fellow classmates for being green. She is instantly judged and disliked by many and she looks after her sister Nessarose who is in a wheelchair. Galinda (as she was known at college) is shallow yet popular with her classmates for her looks and status. Elphaba and Galinda are roomed together through an admin error and the two instantly despise one another. Madame Morrible, headmistress of Shiz notices Elphaba’s innate talent for sorcery and tells he she will be going to meet the Wizard of Oz to study with him. In a history class led by Dr Dillamond, a Goat professor, the class learn about the anti-animal feelings being broadcast around Oz and the class is brought to a swift end when some anit-animal graffiti is found on the chalkboard. Elphaba tries to talk to Dr Dillamond about the changes and he tells her that something has happened to cause the animals in Oz to loose their power of speech. Elphaba listens to his concerns and promises to voice them to the Wizard when they begin to work together.

Meanwhile the school welcomes the arrival of Winkie Prince Fiyero who encourages the students to conform to his mindless and blasé student lifestyle. He is ready for the student dance, and a shy Munchkin named Boq invites Galinda to go with him. She refuses, and asks him to ask Nessarose instead, which he does. Elphaba is greatful to Galinda who gives her a mock gift of a black pointed hat, telling her that ‘black is this year’s pink’. Without realising her real motives, Elphaba asks Morrible if Galinda can accompany her to meet the Wizard, as it is her life long dream. At the dance, Elphaba is ridiculed until Galinda takes pity on her and joins her in dancing, bringing the pair together.

Galinda tries to give Elphaba a make over and teaches her about how to become ‘Popular’. The class are shocked to find that Dr Dillamond has been arrested and replaced by a new history teacher who keeps a lion cub in a cage. He tells them that all animals will eventually be dumbed down and silenced, which angers Elphaba who steals it and sets it free. Elphaba begins to fall in love with Fiyero but realises that she isn’t meant for him. Morrible finds her to tell her that she has been invited for an audience with The Wizard.

Galinda tries to impress Fiyero by changing her name to Glinda in memory of Dr Dillamond, which is the way he used to pronounce her name. Fiyero ignores her and Elphaba feels sorry for her and brings her along to discover the joys of the Emerald City. After meeting the Wizard Elphaba realises that he is a normal man after he tests her and makes her transform his pet monkey into a flying monkey using an ancient book of spells. They trick her into transforming a whole cage of monkeys into flying monkeys and Elphaba is furious, realising that the Wizard of Madame Morrible are behind the animal cruelty in Oz. She runs off with the spell book and enchants a broom to make it fly. Glinda tries to stop her and bring her back down to earth, but the girls decide they must go separate ways in order to fulfil their own dreams. As the Ozians try to capture her, Elphaba soars above them, ‘defying gravity’.

Months later and Morrible has made Oz turn against Elphaba, branding her as The Wicked Witch of the West. She uses her role as press secretary to spread rumours about her powers and potential dangers to the community. Glinda is used as a figurehead for the public as the Wizard’s assistant but Fiyero becomes increasingly tired of her. Elphaba travels to her hometown where her sister Nessarose is now Governor after their father died of shame. Nessa is upset that Elphaba hasn’t used her powers to help her, so she transforms some jewelled ruby slippers that help her walk. Boq is furious with her saying she is as wicked as her sister is, and Nessa tries to put a spell on him which takes away his heart. He calls her the Wicked Witch of the East as Elphaba tries to save him and turns him into a Tin Man. She leaves Nessarose and Boq flees, convinced that it was Elphaba who turned him into a Tin Man on purpose.

Elphaba returns to the Wizard to try and set the flying monkeys free. The Wizard confesses that he has no special powers and still managed to make people think he was the ‘wonderful’ Wizard of Oz. He tries to get her to join him, but she noticed Dr Dillamond locked in a cage and runs away, joined by Fiyero. Glinda realises she has been betrayed and is upset, leading her to plan a trap to get her back. Morrible creates a cyclone that brings Dorothy’s house to Oz, landing on Nessarose, the Wicked Witch of the East. Fiyero and Elphaba, now in exile, express their love for one another. Elphaba senses danger and flies to meet Glinda who has sent Dorothy and Toto off to Oz to see the Wizard. Fiyero is captured and dragged to a cornfield and tortured by palace guards as Elphaba tries any spell to try and save him. She manages to turn him into a Scarecrow so that they cannot physically hurt him. She begins to think it would be easier to accept her ‘wicked’ reputation.

The Scarecrow, The Tin Man and the Cowardly Lion (the Lion Elphaba freed from class) are sent to hunt down the Wicked Witch of the West. Elphaba captures Dorothy in her tower and forces her to give her the slippers she made for her sister. Glinda tries to convince her to let Dorothy go and they hatch a plan, admitting that they have both made mistakes. Elphaba promises to leave Oz if Glinda clears her name, and she gives her the spell book in order to do good. They admit that they are glad they knew each other and that they have become the best of friends. They stage a plan to pretend that she is dead as Dorothy throws a bucket of water over her and she melts. All that remains is the black hat and a vial of green elixir. The Wizard recognises it as one of his own vials and realises that Elphaba was indeed his biological daughter. He is forced to leave Oz in his balloon, and Morrible is sent to prison as Glinda clears Elphaba’s name, returning to the opening scene as she confronts the citizens of Oz.

Finally we learn that Fiyero who is now a Scarecrow staged the melting scene and he and Elphaba escape together as Glinda looks on.