Camelot was a favourite musical of the Kennedy Administration, and one of the most popular Broadway shows of the 1960s. Not only did the show run for over a year, but its original cast album was one of the top selling albums of the year. The show features Music, Book and Lyrics by creative duo Alan Jay Lerner and Frederick Loewe (My Fair Lady, Brigadoon) and is based on the King Arthur legends found in T.H White’s novel The Once and Future King. The show has had more success on Broadway than in London, despite the obvious British interest in the show and legends overall. Julie Andrews and Richard Burton are famous names that have been attached to the show, providing a memorable soundtrack  which included songs such as ‘The Simple Joys of Maidenhood’ and ‘If Every I Would Leave You’. 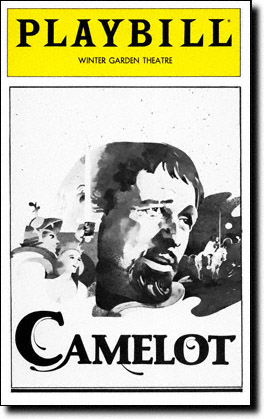 The Once And Future King by T.H. White

Young King Arthur is worried about his upcoming arranged marriage to Guenevere, whom he has never met. Merlyn the Magician persuades him to accept his new bride, but Arthur still reluctantly hides in the woods, pondering what his subjects think of him (“I Wonder What the King Is Doing Tonight”).  Guenevere arrives in the woods and Arthur overhears her also doubting her wedding, preferring instead to maintain the “Simple Joys of Maidenhood.”

Arthur introduces himself as “Wart” (his childhood nickname), and extols the virtues of “Camelot” to Guenevere. She is charmed by his appearance and demeanour, and they nearly share a kiss, before his servants arrive and reveal him as King Arthur. She agrees to marry him without reservations. Meanwhile, Merlyn is beginning to die and worries that he has forgotten to warn Arthur about Mordred and Lancelot, who will prove to be his undoing.

Arthur alongside Guenevere decides to create a new order of knights who will be dedicated to virtue rather than looting. They will be called the Knights of the Round Table and they soon become legendary throughout the lands. A young, arrogant Frenchman named Lancelot arrives seeking to join the order, as he believes himself to be the bravest knight in the world (“C’est Moi”). The Queen has organized a May Day celebration (“The Lusty Month of May”), where she meets Lancelot and instantly dislikes him.

Lancelot soon makes enemies of most of the knights, and three challenge him to a duel. He manages to defeat them all and wins over the favour of the crowd. Guinevere too finds herself attracted to him despite her love for Arthur. Lancelot too is torn between the beautiful Queen and his duty to the King. Unbeknownst to them, Arthur has picked up on their mutual attraction but decides not to do anything to upset the order of the Round Table.

Years pass, and Guenevere and Lancelot still struggle with their unrequited love (“If Ever I Would Leave You”).  Arthur’s illegitimate son, Mordred, arrives in Camelot, determined to take over the kingdom and destroy the Round Table. Arthur and Guenevere begin to tire of the difficulty running a kingdom (“What Do the Simple Folk Do?”), whilst the knights are growing sick of their virtuous lives (“Fie on Goodness!”). Mordred uses their malaise to turn them against Arthur.

Lancelot is unable to resist the Queen any longer and visits her bedchamber at night (“I Loved You Once in Silence”). They kiss passionately before being interrupted by Mordred and some of the knights who arrest them both for treason. Lancelot manages to escape, but Guenevere is tried and sentenced to be burned at the stake. Arthur is torn between saving his kingdom and saving the love of his life. He watches as Lancelot manages to rescue his queen just before she is burned to death.

Arthur reluctantly realises he must fight Lancelot for the sake of his kingdom, and Camelot is torn apart by the resulting civil war. Before the final battle, he meets Guenevere and Lancelot alone. Their relationship has fallen apart, and they both agree to face justice in England. Arthur refuses and forgives them. Guenevere departs for a convent, while Lancelot returns to his troops. Heartbroken, Arthur comes across a young boy who has travelled to Camelot to become a knight of the Round Table. Moved by the boy’s idealism, Arthur knights him and sends him back to England, urging him to tell the tale of the perfect kingdom that once existed named “Camelot.”