The Mystery of Edwin Drood, or ‘Drood’ as it is known to some is a unique musical in which the audience have the chance to choose the outcome. Based on the unfinished novel of the same name by Charles Dickens, the show concerns a murder mystery plot, leaving the audience to select the offender from a range of suspects. The quirky play within a play setting of the musical, along with the different outcome every night helped this musical win the Tony Award for Best Musical, going on to achieve cult status. The show was first seen in the 1980s but has been revived in 2012 in both London and New York, to coincide with the bicentenary of Charles Dickens’ birth. 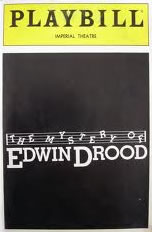 The show opens onstage at London’s Music Hall Royale where the cast are preparing for their nightly version of “The Mystery of Edwin Drood”. The travelling band of players explain to the audience that the novel was never finished by Charles Dickens, as he died before the mystery could be solved. The audience are told that they will play a part in deciding the outcome of the show. The vulgar Master of Ceremonies encourages the audience to be loud and rowdy as everyone joins in on the opening number and the play within a play starts to unfold.

We are introduced to John Jasper, a respectable member of London society who suffers from internal demons. His nephew Edwin Drood (played by a female, Alice Nutting) arrives and tells his uncle about his upcoming marriage to Rosa Bud. Rosa is working at a seminary, and Jasper acts as her music teacher and has composed a song for her to perform for him. As she sings, two orphans arrive and she faints as she hears the lustful lyrics contained within the song. It becomes obvious that Jasper is in love with her, along with Neville Landless, one of the orphans.

The next character to be introduced is Princess Puffer who runs an opium den – a venue that is frequented by Jasper. Jasper dreams of Edwin and Rosa. The gravedigger Durdles enter to make a grave for the wife of Mayor, but the actor playing his assistant is too drunk to partake, and the Master of Ceremonies has to step in and take over.

The Reverend introduces Edwin to the Landless twins. Drood tells them about his plan to create a highway in the Egyptian desert, but Neville takes offence and it seems clear that the two are set to be rivals. The Mayor arrives and warns the audience that often things are not exactly what they may seem…

Jasper visits the cemetery where he steals the key to the Mayor’s Wife’s tomb. Edwin and Rosa are both worried about their upcoming wedding and decide to break off the engagement. They agree not to share the news until after Christmas. The next day they gather for a Christmas dinner where each character’s rivalries and motivations are revealed to the audience. Edwin is followed by Neville to the river, borrowing Jasper’s coat.

On Christmas Day we find out that Edwin has gone missing. Bazzard, the Detective’s assistant (who is given a small moment in the spotlight) finds Jasper’s bloodied coat and it is assumed that Drood has been murdered. Neville is the first suspect and is arrested, before being later released. Jasper admits to Rosa that he loves her, but she ignores his advances and their heated debate leads to a reprise of the song he wrote for her, ‘Moonfall’.

The second act begins six months later and Edwin is still missing. Princess Puffer is joined by Dick Datchery to help solve the crime, as the Master of Ceremonies reminds the audience that they must pay attention to all of the clues. Puffer tells Rosa that she must not give up her search to find Drood and the show stops abruptly, and it is explained that this is as far as Dickens got in writing the novel. The cast reveal that the female impersonator Alice Nutting who has been playing Drood has also been playing Datchery, and she insists that Drood is not dead. The cast vote in favour of him being dead, and she storms off the stage, convinced they are jealous of her talents. The audience then are left to vote for who they think Datchery is – and the actor they choose goes to prepare for the final scene.

Next comes the voting of the murderer. The audience is divided into sections, and vote for the murderer out of the potential suspects: Bazzard, Crisparkle, Helena, Neville, Puffer, Rosa or Durdles? Puffa’s confession reveals that she had previously been Rosa’s nanny and the identity of Datchery is made known after the audience vote has been counted. Whoever is playing Datchery says why they wanted to find the murderer and points the finger at Jasper. He confesses that he has killed his nephew whilst high on opium. Durdles stops the show and says that he witnessed the killing, revealing exactly who is to blame from the suspects. The chosen suspect delivers their confession. The audience then get to pick who they want to end up as lovers, before Edwin arrives back onstage and paints the writing on the wall.