The Bodyguard is a brand new musical based on the 1992 award winning movie of the same name. The show has been in pre-production for some years, despite many thinking it was triggered by the death of Whitney Houston early in 2012. The musical features the songs of Whitney Houston exclusively, with no original material written for the production. Most of the songs are performed as performances by the lead character Rachel rather than to progress the story, resulting in a strange form that is half musical, half play with songs. The show stars Tony Award winner Heather Headley in the lead role of superstar Rachel Marron alongside Lloyd Owen as her protector. 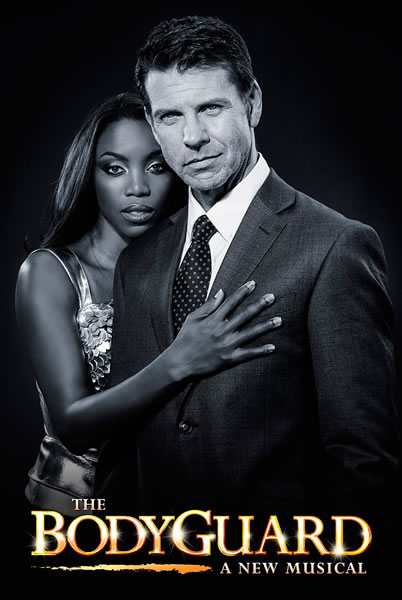 A dark, smoky gauze opens the show and we hear a loud gunshot. A spotlight on Frank Farmer and a shot body quickly fades away as we hear the opening to “Queen of the Night”. International superstar Rachel Marron is onstage giving a performance in front of screaming fans, after just receiving two Oscar nominations for Best Actress and Best Original Song. Ray Shell tries to convince bodyguard Frank Farmer to take on a new case, offering more money to get him to look after Rachel and her family. He introduces him to the Stalker’s methods and letters that Rachel has been receiving, without her knowledge, and is intrigued enough to get involved.

At Rachel’s home we meet her team, including her head of security Tony, choreographer and seven year old son Fletcher. They are busy rehearsing for an upcoming performance. Frank meets Rachel, and is not well liked at first by the rest of his team. He watches Rachel and her backing dancers perform, “I’m Your Baby Tonight”. He meets Nikki, Rachel’s sister who is also a singer but has spent her life walking in Rachel’s shadow, despite writing the Oscar nominated song with her. She helps Frank by giving him a list of places Rachel frequently visits along with people she sees. She tells Frank she is performing later that evening in a small bar. Frank is intrigued by Nikki and tries to question her further, but she leaves.

We are introduced to Rachel’s stalker who has breached security by leaving letters in her dressing room and taking pieces of her costume. He sings “Oh Yes” which turns into a duet with Rachel on a screen, until she appears in a dress and completes the performance.

Nikki is performing “Saving All My Love For You” in a small bar, and is surprised when Frank arrives to listen. As she drinks with him, it becomes clear that she likes him, although he is just interested in finding out about her past issues with Rachel. He lends her his jacket and makes sure she gets home safe.

Back at Rachel’s house her manager is trying to get her to agree to doing a small, exclusive performance. Frank is against the idea, telling Rachel that she needs to listen to him as it is his job to protect the family. She argues with him, and tells her manager that she will perform as not to let her fans down. Frank asks her manager why he hasn’t told her about the stalker, and he explains that he doesn’t want to distract her from the Oscar campaign.

Rachel is announced as a special guest at the club and everyone is excited. As she prepares to perform to a sell out audience, Frank preps the security team to make sure they know how to get her out in case there is a problem. She arrives onstage and performs “So Emotional”, but as she comes face to face with her stalker she is rescued by Frank who safely drags her offstage.

Alone at home Rachel performs “Run To You” as she comes to realise that she has feelings for Frank. The scene splits between her and Nikki who also sings about her feelings for Frank. The next day Rachel asks Frank if she can go on a date, saying the only way it could possibly happen is if he comes with her. He leaves the question hanging as Nikki returns his jacket, thanking him for coming to watch her perform.

Frank accepts Rachel’s offer of a date and takes her to a karaoke bar where three girls perform “How Will I Know?” As they continue to flirt, Rachel makes a bet with him that she can guess how his life has been. He agrees to sing for her on the karaoke, delivering a self conscious rendition of Dolly Parton’s “I Will Always Love You”. Rachel (who is supposed to be incognito) sings “I Have Nothing” as the first act ends, with spotlights on Nikki, Rachel, Frank and The Stalker.

The second act begins in Frank’s bedroom as Rachel sings to him whilst he sleeps, “All the Man I Need”, which segues neatly into a recording studio where Rachel is laying down the track. Nikki is bitter about her new relationship with Frank. Rachel is getting prepared to leave for Miami for a benefit concert, and Frank tells Fletcher that he has to stay at home, but does give him a pass to get into the Academy Awards.

In Miami Rachel performs “I’m Every Woman” to a delighted audience. Frank checks in on Fletcher, who hasn’t realised that The Stalker is in their house acting as a security guard. Nikki is at home along watching Fletcher and sings “All At Once”, upset at losing yet another thing to her sister. As she goes in to check on Fletcher, she pulls back the covers to see a dead animal carcass in his bed which has been left by The Stalker. Rachel, Frank and their team arrive home in shock. Frank tells her they can’t continue to be together as it is dangerous for the whole family. He makes her cancel the rest of her promotional tours and takes the whole family to his family log cabin.

Rachel meets Frank’s father and learns his mother died of cancer the year before, when Frank was busy looking after the Senator. Whilst at the funeral of his mother, the senator was shot and his father explains how Frank carries that guilt. Fletcher and Nikki sing together “Jesus Loves Me”, but as they settle down to bed, The Stalker breaks into the house and kills Nikki, thinking it is Rachel. As Frank arrives, he flees and a chase sequence is projected onstage showing The Stalker running away from Frank.

Despite the obvious dangers, Rachel decides to perform at the Oscars, as she tells Frank how it was always her sister’s dream to win an Academy Award. At the ceremony, security is obviously tight. Rachel arrives to sing “One Moment in Time”, her Oscar nominated song. As she reaches for the final note, Frank jumps onstage to take a bullet for her from The Stalker and the safety curtain comes down.

A few weeks later Rachel and Fletcher are preparing to move away. Frank returns with his arm in a sling and brings Fletcher a gift. It is an emotional farewell, and as she leaves Rachel begins to sing “I Will Always Love You” to a large projection of Frank’s face. The whole cast returns to the stage for an upbeat encore of “I Wanna Dance With Somebody”.

• Queen of the Night – Rachel and Ensemble
• I’m Your Baby Tonight – Rachel
• Oh, Yes – Stalker, Rachel
• Saving All My Love for You – Nikki
• So Emotional – Rachel
• Run To You – Rachel, Nikki
• How Will I Know – Featured Ensemble
• I Will Always Love You (Dolly Parton version) – Frank
• I Have Nothing – Rachel

• All The Man I Need – Rachel
• I’m Every Woman – Rachel, Ensemble
• All at Once – Nikki
• Jesus Loves Me – Nikki, Fletcher, Rachel
• One Moment in Time – Rachel
• I Will Always Love You – Rachel
• I Wanna Dance With Somebody – Full Cast, Encore

1 thought on “The Bodyguard”