High Society is a musical based on the film of the same name, which in turn is based on the Phillip Barry play ‘The Philadalphia Story’. The show features a score by Cole Porter and uses songs he wrote specifically for the production, along with a number of songs from his back catalogue. The story focuses on a wedding between a Long Island socialite and a pretentious executive that is thrown into disarray when her ex-husband arrives. The original Broadway production was not particularly successful but the show found an audience in the West End, thanks in large to the Regent’s Park Open Air Revival directed by Ian Talbot, on which the 2005 revival was based. The show continues to tour in the UK and is set to do so again starring Daniel Boyes. 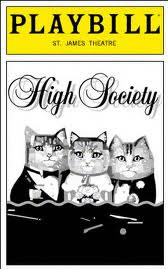 On an estate in Long Island’s Oyster Bay we are introduced to Tracy Lord, a socialite who is preparing to marry again. Her mother is fraught due to the weddings preperations and her sister Dinah is upset that she is marrying one of the dullest men around. Tracy reminds her absent minded Uncle Willie about the upcoming event but her positive mood is short lived as Dexter her first husband has returned, sailing in on the ‘True Love” boat that hold painful memories for Tracy.

Dexter tells Tracy that a pair of reporters from a local scandal magazine called ‘Spy’ are attending the wedding disguised as guests. Dexter has invited them to stop the magazine publishing a story about Tracy’s father Seth’s affair with a young dancer Tina Mara. Seth has been thrown out of the house and is told not to attend the wedding. Dinah is left alone with Dexter and he makes it clear that he hasn’t come to win Tracy back.

As the guests arrive they are greeted by Dinah and Tracy, who introduces her Uncle Willie as her father to make sure no one guesses the real reason he isn’t invited to attend. This causes some mayhem as Seth has to explain to some of the men the secret of Tina’s allure. Tracy meets Dexter by the pool and he brings her down enough for her to start questioning her world. She suddenly finds her fiancé to be boring and stares out at the True Love boat remembering her fantastic honeymoon with Dexter. She begins to drink champagne as the act ends.

Tracy arrives drunk at Uncle Willie’s party at 4am and begins dancing with the staff. George is outraged and storms off. Dinah is excited and rushes off to tell Dexter. She finds him packing up ready to leave and convinces him that he has a chance, as she is knocking back champagne. At the party, George reminds Tracy that they have a big day coming up and tells her off for being drunk. She calls him a snob, and as she leaves she kisses Mike and the pair rush of to go skinny dipping. Dexter and Dinah arrive to witness the mayhem. Dexter explains to Tracy the plot involving her father as George arrives in time to see Mike carrying Tracy in nothing but a robe. Dexter stops George hitting Mike and Mike takes her to bed.

The next morning Tracy wakes up and remembers she was in the pool the night before with a man other than her husband to be. As Mike enters she realises it was him and thinks the marriage must be over. Tracy’s mother and father mend their relationship as the blackmail attempt is lifted. Dexter volunteers to marry Tracy as George is no where to be found, as Dinah rests happy knowing her meddling has created happiness.