Hello, Dolly! features music and lyrics by Jerry Herman, along with book by Michael Stewart. The musical is based on the Thornton Wilder play ‘The Matchmaker’ and follows Dolly Levi who in infamous for her romantic pairings. The musical achieved great success in its original Broadway production, produced by David Merrick. The show fought off stiff competition from ‘Funny Girl’ to win the Tony Award, and has since gone on to achieve worldwide acclaim, along with a successful 1969 film starring Barbara Streisand. 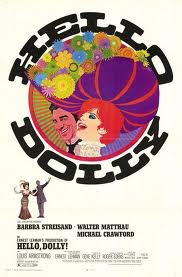 The Matchmaker by Thorton Wilder

At the turn of the 20th Century New York City is excited as Dolly Levi comes to town. She has made a name for herself as a matchmaker and ‘meddles’ in people’s lives in order to find them a partner. She intends to marry the grumpy half-a-millionaire Horace Vandergelder but pretends she is finding him another suitable match. A young artist Ambrose has his heart set on Horace’s niece Ermengarde but Horace opposes it based on his living and lack of a steady job. Ambrose enlists the help of Dolly and they travel to Yonkers to visit Horace.

Horace tells his two clerks Cornelius and Barnaby that he needs to get married to have a woman around to do the household chores. He wants to travel with Dolly to the parade in New York Cityto propose to hat shop owner Irene Molloy who is a widow. Dolly throws a spanner in the work, questioning the death of Irene’s husband as Horace leaves Barnaby and Cornelius in charge of the shop. They decide they want to travel into the city to have a great day and blow all of their money. Dolly encourages them to meet up with Irene and her assistant Minnie. She tells Ermengarde and Ambrose that she has entered them into a dance contest to prove that they are a good match to Uncle Horace. They all put on their Sunday clothes and travel into New York.

In the hat store Irene and Mini dream of finding husbands, although Irene does not love Horace. Cornelius and Barnaby arrive and pretend to be rich, hiding as Horace and Dolly arrive later. Fun ensues as the girls try to hide the boys from Horace, not knowing his clerks are both hidden in the store.

Dolly arranges dinner for Cornelius and Barnaby with their lady friends and teaches them how to dance in an upmarket environment. They take their girls out for the night and dance with them, watching the parade pass by. Dolly requests a sign from her late husband to let her know she can marry Horace. As she meets a furious Horace she convinces him to give matchmaking another chance, and tells him she knows the perfect girl for him.

At the Harmonia Gardens Restaurant Cornelius and Barnaby are desperate to have a kiss from their girls. The head waiter prepares the staff for Dolly’s return just as Horace arrives with his new date that is soon bored of him and leaves, as Dolly predicted would happen. As they all sit down to dine the clerks are unaware that their boss is in the same building. The girls order the most expensive items on the menu. Dolly is greeted in style with the show’s title number and she sits with Horace, telling him that no matter what he says to her, she will not marry him. As Barnaby mistakes his wallet for Horace’s, the plan unravels and Horace spots the clerks along with Ermengarde and Ambrose. The calamity leads to night court.

Barnaby and Cornelius confess that they love their female friends, and Dolly convinces the judge that their only crime was being in love. The judge clears them of all charges but forces Horace to pay damages. Horace tells Dolly he wouldn’t marry her if she was the last woman on earth and Dolly angrily says farewell.

As the couples decide to embark on their new lives together, Horace finally admits that he can’t live without Dolly. He tells her his life would be dull without her and she promises to stay with him.