Hairspray features a score by Marc Shaiman and Scott Wittman along with a book and libretto by Mark O’Donnell and Thomas Meehan. The musical is based on the 1988 John Walters film of the same name. The stage musical was then remade into a successful musical film starring John Travolta and Zach Effron. The show won both the Tony Award and Olivier Award for Best New Musical, along with a large amount of critical praise leading to commercial success.  Set in 1960s Baltimore, the story leads an important discussion about race and body image with an inspirational message to all and includes a fantastic upbeat score. 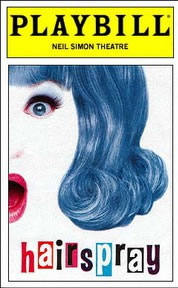 the 1988 John Walters film of the same name

In 1960s Baltimore, Tracy Turnblad wakes up in her usual cheery mood and says ‘Good Morning, Baltimore’ as she heads to school with her best friend Penny. The pair rush home later in the day to watch their favourite TV program ‘The Corny Collins Show’, to the resentment of Tracy’s mother Edna. The pair dream of dancing on TV like the perfect teen dancers, and when they see an advert to audition for the gang, they are extremely excited. The show is controlled by Velma von Tussle who makes sure her daughter Amber is always in the limelight. As she sees Tracy she teasers her over her weight and tells her she will never be a dancer. Tracy meets teenage heartthrob Link Larkin and instantly falls in love with him.

At school Tracy is put in detention alongside Penny, and the two first meet Seaweed, a black dancer whose mother Motomouth Maybelle runs the ‘Negro Day’ once a month on ‘The Corny Collins Show’. He teaches them some new dance moves that instantly win Tracy attention, and her popularity sky rockets. Edna is forced to leave the house as Tracy welcomes her to the 1960s, getting her a brand new dress and hair-do so she can act as her manager.Tracy’s fame build around school and girls start to copy her signature hair-do. A jealous Amber knocks Tracyout during gym class, and Link rushes to her side to assist her. Penny and Seaweed drag Tracy and Link along to a platter party hosted by Motomouth Maybelle at her record shop.

Tracy is disgusted to learn that blacks are not allowed to take part in the televised ‘mother-daughter’ day, and tries to lead a rebellion to kick start a civil rights movement. Maybelle convinces Edna and admits that she is ‘Big, Blonde, and Beautiful’.

After the demonstration most of the gang are locked up for breach of the peace. Wilbur, Edna’s long suffering husband bails her out of jail, but Tracy is forced to stay locked up. Link sneaks into the prison to free Tracy, as Seaweed sneaks into Penny’s house to free her from her prudish mother. They admit their feelings to each other and decide that after all of their hard work, they have to storm the ‘Miss Teenage Baltimore Awards’ on TV. They devise a plan to integrate the show, and storm the filming much to the dismay of Velma and Amber. As the votes are announced,Tracy storms the stage with a message for racial equality, and is soon declared the winner of the contest. Link is then offered a recording contract and Velma is relegated to another show. ‘The Corny Collins Show’ becomes fully integrated and the full cast sing ‘You Can’t Stop the Beat’.