How to Succeed in Business Without Really Trying (H2$) is one of the most popular Broadway musicals of the period. The show won the Pulitzer Prize for its depiction of a specific time and place. The original production broke records, and numerous revivals have provided opportunities for star performers. The show shows the sexual office politics of a 1960s New York office firm, as window cleaner J Pierrepont Finch climbs the company ladder aided by a clever self narrating book. 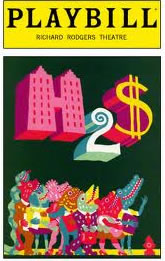 the book by Shepherd Mead

When window washer J Pierepont Finch finds a book titled ‘How to Succeed in Buisness Without Really Trying’ he follows its easy steps in order to climb his way up the corporate business ladder in 1950s New York. At the World Wide Wickets Company he slots into the company machine where no one knows exactly what each other is doing. He catches the eye of secretary Rosemary who tells her friend Smitty that he is the perfect man for her, and she would be ‘Happy to Keep His Dinner Warm’ at home. Chairman of the Board JB Biggley is the boss of the company and his annoying nephew Bud Frump attempts to use his family connections to travel up the corporate ladder. Finch begins life in the mailroom under the watchful eye of Mr Trimble, the ultimate ‘company’ man. Finch finds an opportunity to advance from the mail room quickly, to the annoyance of Bud and the other men in the company.

Biggley is having an affair with the sassy Hedy La Rou who demands to work in the office. He finds her a job as a secretary, but the men of the company have to be reminded that ‘a secretary is not a toy’. Rosemary continues to battle to win Finch’s affections, buying herself a new dress in order to impress him at a corporate party. Bud plots to set Finch up, trying to get him in a compromising situation with Hedy so Biggley will fire him. After briefly kissing Hedy, Finch realises that he is indeed in love with Rosemary and the two admit their feelings for each other. Bud swears he will not be beaten.

Some time passes and Rosemary is once again upset with Finch. Smitty and the office girls convince her to stay with him, saying she is an inspiration and a ‘real life fairy tale’. She agrees to stay, and ends up as Finch’s secretary. As Hedy tells Biggley she is leaving him he admits his true feelings and the pair become sincere for the first time. Bud rallies the men in the office against Finch and they plot to bring him down the corporate ladder. As head of advertising Finch actually needs to show some potential and Bud gives him an idea that he knows his uncle will hate. Finch is nervous but sings a love song to himself in the mirror. In a board meeting Finch pitches the idea of a pirate themed treasure hunt to find shares for the company. It ends up going horribly wrong and the business is threatened with closure. Finch once again manages to talk his way out of trouble, rallying the executives together in ‘the Brotherhood of Man’. Finch is made chair of the board and reaffirms his love for Rosemary.