Parade is written by Alfred Uhry, featuring music and lyrics by Jason Robert Brown. The musical was first produced on Broadway at the Vivian Beaumont Theater on December 17, 1998 in a production directed by Hal Prince. The show is a musicalised version of the trial of Jewish Factory manager Leo Frank which occurred in 1913 America, where the defendant was accused of raping and murdering a 13 year old girl. The music draws on a rich tapestry of musical influences, and Brown’s score is one of the finest in the modern musical theatre repertoire. The show has since been seen at the Donmar Warehouse in London. 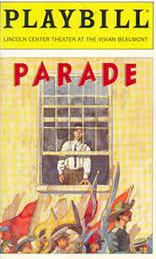 In 1913, Leo Frank, a Jewish man from Brooklyn has emigrated to Georgia, where he runs a pencil factory. He does not feel he fits in the still prejudiced town (“How Can I Call This Home?”). His wife Lucille plans a picnic, but Leo decides to go into work on his day off. Two teenagers in the town, Frankie Epps and Mary Phagan head to “The Picture Show,” but first she stops by the factory to collect her pay cheque.
Two policeman arrive at Leo’s house and bring him to the factory, where they reveal Mary, who has been raped and murdered in the basement. The prime suspect is Newt Lee, an African-American night watchman who discovered the body. Over the course of the “Interrogation,” he says he is innocent, and causes the police to suspect Leo when he says he did not receive an answer when he called Leo’s house upon discovering the body.
The police arrest Leo, and news of the case begins to spread through the shocked town.

A few people in town begin to see the case as an opportunity to shine. Journalist Britt Craig sees it as the biggest story to come along in years. Governor Slaton calls the town’s prosecutor Hugh Dorsey and advises him he had better come up with a conviction no matter what. A right-wing newspaper writer, Tom Watson, decides he will cover the story with an anti-Semitic slant, and Frankie vows revenge on whoever killed Mary.

Though the evidence seems to indicate that Newt committed the crime, Dorsey decides they’ve already hanged enough African-Americans and focuses the case on Leo because he is Jewish. Meanwhile, Luther Z. Rosser takes on Leo’s case and promises to set him free. Lucille is flustered by the situation but stands behind Leo at his trial.

Craig and Watson have successfully engineered a campaign of hate against Leo before the trial has even begun. In court, Dorsey has arranged a number of witnesses to testify falsely against Leo. Frankie says that Mary mentioned Leo looking at her strangely before she was killed. Three teenaged girls who work at the factory each claim that Leo made sexual advances on them (“Come Up to My Office”). Finally, an ex-convict who briefly worked at the factory is given immunity from prosecution of his own crimes for claiming he helped Leo cover up Mary’s murder.

Leo is mortified at the number of people who have been found to falsely testify against him, and he makes a passionate speech maintaining his innocence (“It’s Hard to Speak My Heart”). Nevertheless, he is found guilty and sentenced to death.

Rosser immediately appeals the verdict, and the case becomes the cause of public outrage in the North given its clearly prejudiced nature. Lucille goes to Governor Slaton to plead for help, and meanwhile Dorsey decides to run for governor against the incumbent. The governor agrees to hear the appeal. He first finds the factory girls who admit they made their stories up. He visits Jim Conley, who has wound up in jail as an accessory to the murder, who refuses to recant his testimony.

The Governor decides to commute Leo’s sentence to life in prison given the lack of evidence against him. Leo regrets “All the Wasted Time” he spent at the factory instead of with Lucille. Furious at the governor’s decision, a mob descends on the jail and kidnaps Leo before hanging him from a tree. Lucille is devastated but relieved that Leo’s horrific experience is finally over and that he is in a better place.