You’re a Good Man, Charlie Brown was written in 1967 by Clark Gesner and is a musical based on the Peanuts cartoons created by Charles M Schulz. From modest beginnings off-Broadway the show has developed a cult following and is continually performed around the world, especially by theatre schools, summer camps and rep groups. The show gained more followers after the 1999 revival which starred Kristin Chenowerth and performed successfully at the Tony Awards, with a new song created by Andrew Lippa. The show follows a typical day in the life of Charlie Brown, along with his dog Snoopy. Characters such as Schroeder, Lucy and Linus all make an appearance with a number of group songs to tie the narrative together. 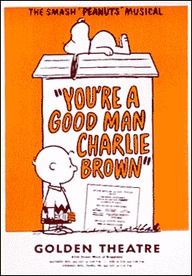 based on the comic strip Peanuts by Charles M. Schulz

You're a Good Man Charlie Brown - Original Off Broadway

The show opens with Charlie Brown standing alone as his friends surround him with positive remarks. This prompts him to wonder if he really is what they think and he strives to be a better character, (“You’re a Good Man Charlie Brown”). At school he talks about how some days are better than others, and notices the Little Red-Haired Girl that he wants to sit with but can’t find the courage to do so. Lucy tells everyone she is infatuated with Schroeder and asks him if they can be married. He ignores her and continues to play the piano, “Schroeder”.

Snoopy relaxes on the top of his doghouse and begins to daydream about being chased, (“Snoopy”). Linus enters along with his blanket that he keeps with the all the time and is mocked by Lucy and Sally. He has a fantasy involving a world where everyone can relax with their favourite blankets, (“My Blanket and Me”).
Charlie Brown tries to get his kite to fly (“The Kite”) but it ends up getting caught in the kite-eating tree. Charlie Brown tries to give Lucy a Valentine’s Day card but ends up going wrong and making a fool of himself. Lucy acts as a Doctor and begins to analyse his habits, “The Doctor is In”. Schroeder gets the whole company to delight in the news of Beethoven’s birthday and they all sing “Beethoven Day”.

At school everyone has to work on their Peter Rabbit book report and everyone is worried about the 100 words. Schroeder compares it to Robin Hood, Linus delivers a complicated psychological analysis and Charlie Brown can’t even seem to put pen to paper, (“The Book Report”).

The second act begins with Snoopy pretending he is a World War I pilot, searching for “The Red Baron”. Sally is upset that her teacher has given her a D on her homework assignment and develops a “New Philosophy” which involves the word “NO!” The group take part in the Little League Baseball Championship and as Charlie Brown steps up to bat he strikes out and loses the whole game, (“The Baseball Game”). Lucy realises that her crabbiness rating if 95% and is upset with herself. Looking for a new talent, Charlie Brown joins Schroeder’s Glee Club which no one seems to taker seriously, leaving Snoopy as the only one singing, “Glee Club Rehearsal”.

Lucy tries to teach Linus about the ways of the world including examples of bugs making the grass grow and eagles being the best food for Thanksgiving. Charlie Brown knows this is wrong but she won’t be corrected on her “Little Known Facts”. Snoopy meanwhile is upset that Charlie Brown hasn’t fed him and bursts into a production number about “Suppertime”. Charlie Brown is still trying to figure out what makes him a ‘good man’ and discovers a pencil which the Little Red-Headed Girl has dropped. He realises that is has teeth marks on and that she is therefore human! He finally understands that it is the little things in life that can lead to “Happiness” and realises that to be a ‘good man’ you have to try your best.

From the Revival Version (music by Andrew Lippa)