Damn Yankees is a classic Broadway musical from the 1950s that has become a favourite show in the USA, thanks to a number of high profile revivals and regional productions. The original production took home the Tony Award for Best Musical and Bob Fosse’s unmistakable style became synonymous with the show itself. Based on the Faustian myth, Joe sells his soul to the Devil in return for the Washington Senators having a chance at the Baseball Pennant. He is seduced by the Devil’s assistant Lola, who was memorably played in the film by Gwen Verdon. Recent revivals of the show have included the Encores! series which starred Sean Hayes as Mr Applegate. 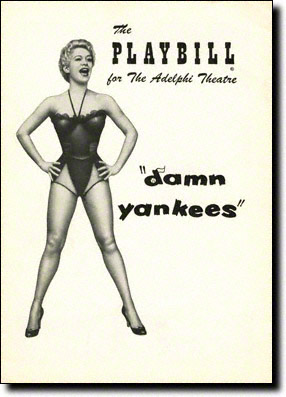 Douglass Wallop’s play The Day the Yankees Lost the Pennant

Real Estate agent Joe Boyd is a die-hard fan of the Washington Senators, a failing baseball team, and his wife Meg hates that it consumes his life for “Six Months Out of Every Year.” One evening, mourning another loss, he mumbles to himself that he would sell his soul if the team were successful. A salesman, Mr. Applegate, suddenly appears, and turns out to be the Devil in disguise. He offers Joe a plan: in exchange for his soul, Mr Applegate will transform Joe Boyd into Joe Hardy a young, athletic man who will be able to lead the Senators to victory. Joe insists on an exit clause, and Mr. Applegate agrees that if Joe leaves the team before their final game, he can have his soul back – if not, he will lose it forever.

The Senators lament their latest loss, but insist that they still have “Heart,” and can win if they try harder. Joe Hardy arrives to join the team and a reporter named Gloria Thorpe instantly recognises his talent and writes a story about this “Shoeless Joe from Hannibal, Mo.” Joe misses his wife and, still in disguise, rents a room in his old house from Meg, who is upset over her missing husband (“A Man Doesn’t Know”).

Mr. Applegate grows concerned that Joe will renege on the deal, so he calls up one of his most loyal servants, a sultry temptress named Lola. She agrees to seduce Joe and will force him to stray from his wife with “A Little Brains, A Little Talent.” Mr. Applegate introduces her to Joe, who rebuffs her advances, despite her assurances that “Whatever Lola Wants, Lola Gets.” When she fails, Mr. Applegate shows her “Who’s Got the Pain” by sending her back to hell.

Mr. Applegate is forced to come up with a new strategy and decides to publish claims that Joe Hardy is really an escaped con artist. Gloria becomes aware of the allegations and forces the matter into court. Meanwhile, the Senators are gearing up for “The Game” without Joe, who confesses to Meg that he is really her husband in “Near to You.”

The trial is scheduled for the same day as the big game, and though Mr. Applegate conjures up a number of people to testify against Joe, the prosecution’s case ultimately unravels. Scared he will lose Joe’s soul, Mr. Applegate banishes him to hell, but moved by Joe’s genuine love for Meg, Lola helps him escape.

Joe joins his team for the final game, only for Mr. Applegate to arrive when Joe is at bat with just five minutes until the deadline specified in his exit clause. He causes Joe to get two strikes against him, and with just seconds before he will lose his soul for ever, Joe insists that Mr. Applegate let him go. He is immediately transformed back into the middle-aged Joe Boyd. He miraculously manages to still hit a home run, winning the game for the Senators.

He returns home to his beloved Meg, only for Mr. Applegate to arrive and insist on claiming Joe’s soul. Meg pleads for Joe’s soul in “A Man Doesn’t Know, Reprise.” Lola arrives to explain that even the Devil cannot overcome true love and they both retreat to hell as Joe and Meg live happily ever after.