Bugsy Malone is one of the most popular movie musicals ever made, directed and written by film maker Alan Parker. The success of the film, which famously featured an all child cast, spurned numerous stage productions around the world, and the show is a popular choice for schools and amateur theatre companies, because of the heavy child involvement. The original London production opened in 1983 where it ran at Her Majesty’s Theatre. A particularly well received production opened in 1997, performed by the National Youth Music Theatre which starred Sheridan Smith. 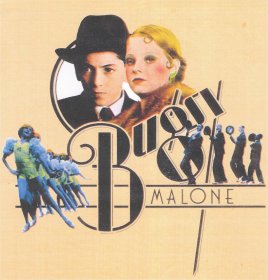 the film of the same name

“Bugsy Malone” walks around his neighbourhood where three murders have taken place (all committed with “splurge guns” that shoot whipped cream). He arrives at “Fat Sam’s Grand Siam,” run by the eponymous mob boss. Fat Sam is furious that one of his henchmen was killed in the recent spate of murders committed by his rival Dandy Dan.

At the club Bugsy meets Blousy Brown, a girl who has auditioned to sing at the club but been rejected, as Fat Sam prefers letting his girlfriend Tallulah sing. Bugsy takes her out to dinner and they begin to fall for each other before the restaurant is raided by Dandy Dan, who hopes to take command of the town as the sole mob boss (“They Call Him Dandy”).

Blousey auditions for a part in the Lena Marelli show at another nightclub, as Lena has just quit. However, just as she begins to sing Lena returns to work, and it appears her quitting is a weekly ritual. Bugsy consoles a dejected Blousey by promising to speak to Fat Sam for her about a job.

At the club, Fat Sam is worried about Dandy Dan’s growing power and sends his gang to obtain new weapons. However, they are ambushed and taken out by Dandy Dan and his henchmen. Fat Sam and his only remaining cohort Knuckles have no choice but to secure the services of psychotic killer Looney Bergonzi and arrange a meeting with Dandy Dan himself. Meanwhile, Blousey has arrived to audition for Fat Sam, and walks in on Tallulah seducing Bugsy. Devastated, she still manages to secure the gig, and Bugsy attempts in vain to reconcile with her.

Fat Sam pays Bugsy $200 to serve as the getaway driver for their meeting with Dandy Dan. When their secret weapon Looney Bergonzi is revealed, Dandy Dan’s posse emerges from the shadows and attacks them. Bugsy quickly manages to pull Fat Sam to safety and is rewarded with an additional $100. He finds Blousey to tell her about the money, which he plans to use to take them to Hollywood where she can become a real star.

Bugsy is mugged by thugs who steal all of his money, but he is helped by a stranger named Leroy who impresses him with his fighting skills. Bugsy believes he could be a boxing star and decides to take him on as his manager (“So You Wanna Be a Boxer”).

Fat Sam is planning a final assault on Dandy Dan and sends Tallulah to ask Bugsy for help. She finds him at the train station where he is waiting for Blousey to arrive for their trip to Hollywood. Tallulah tells him Fat Sam will give him $400 for his help, and he agrees, leaving Blousey to find the station empty. She calls Bugsy who says he has things to do instead of going on the trip, and Blousey is heartbroken (“Ordinary Fool”).

Fat Sam and Bugsy bring Leroy along to the fight, but finding themselves outnumbered, they enlist the help of men standing in a local breadline (“Down and Out”). Just as they meet up with Dandy Dan’s gang, the police arrive, but Bugsy, Fat Sam and Leroy all manage to escape. They head back to Fat Sam’s club, where Bugsy gives an elated Blousey two tickets to Hollywood. Dandy Dan invades the club and a massive splurge gunfight ensues.