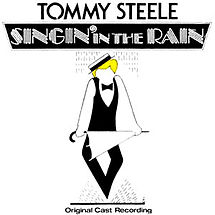 The MGM Musical film of the same name

The show starts at the premiere of Don Lockwood and Lina Lamont’s latest Hollywood blockbuster as crowds gather to see the celebrity couple who are the toast of the silent movie industry. The production company Monumental Pictures tells the crowd they are linked romantically in order to increase their appeal. Whilst this would suit Lina, it does not please Don. Whilst trying to escape fans, Don jumps into the car of Kathy Seldon. She is initially shocked and pretends not to recognise him or be impressed by his job. She tells him she is a professional actress and acts cold towards him.

Don continues to a party hosted by the studio boss R.F Simpson who begins by showing them the future of cinema with a talking movie. The guests are sceptical and do not feel threatened by the talkies’ arrival. A cake is wheeled on for the celebrations, and Kathy pops out of it as part of the entertainment troupe, much to her embarrassment when she sees Don. She is furious that she has been caught out as an out of work actor and when Don teases her she throws a cake at him, which mistakenly hits Lina in the face. Lina is furious and Kathy escapes, angry at Don.

Don enlists the help of his best friend Cosmo who also works at the studio as part of the music department. Together they try to track down Kathy. She arrives at the studio for an audition and Don spots her and they settle their differences. Lina is still angry at her outburst and wants Kathy to be fired.

A rival studio have a huge success with a talking picture, ‘The Jazz Singer’ which prompts R.F Simpson to compete in the same field and offer a rival talking picture. The studio is not set up for such a project and does not have the same level of expertise. Lockwood and Lamont’s latest film ‘The Dueling Cavalier’ is ready to be filmed and R.F decides to turn it into their first talking picture. The main difficulty is Lina’s voice, which is both grating and irritating and doesn’t match the beautiful persona her silent films have projected to her fans. Despite enlisting the help of various dialect coaches, Lina does not improve and her voice threatens to ruin the production. The production crew don’t know where to position any of the microphones to pick up the dialogue, and experiment placing them on the character’s body and in props.

The film is made and screened to a test audience, which is a disaster. The soundtrack does not run in sync with the picture and the audience are left in stitches. Cosmo suggests dubbing Lina’s voice with Kathy’s, and the trio convince R.F that the movie should become a musical version called ‘The Dancing Cavalier’. After they stay up all night to plan, Don and Kathy grow closer and closer and begin to fall in love. Lina is furious at the news and tells R.F that he needs to cancel Kathy’s screen credits and promotion, and he falls to her demands. Filming begins on the production which includes a contemporary ‘Broadway Melody’.

At the premiere of the movie, the musical is a roaring success. The audience cheer for Don and Lina and demand a live song from Lina. Cosmo improvises a plan to have Kathy lip sync behind a curtain as Lina performs to the audience, and as she does so they raise the curtain to reveal Kathy as the true voice of the picture. Lina is embarrassed when her fraud is exposed and as Kathy tries to run away Don presents her to the audience. They eventually kiss.

1983 Olivier Awards: Nominated for Best Actress in a Musical

2012 Olivier Awards: Nominated for Best Actress in a Musical, Best Performance in a Supporting Role