Blood Brothers is one of London’s most popular musicals and has been playing for just under 25 years. The show started out as a simple production in a school hall, before being developed further by Bill Kenwright. The show opened originally in Liverpool where it is set, and later came to the West End after many tours, featuring a wide range of celebrities in th leading roles. The show transferred to Broadway where it enjoyed modest success where Kiki Dee starred as Mrs Johnstone. The London production recently announced it was closing at the Phoenix Theatre, just shy of its 25th Birthday, putting it at the top alomgst other long running shows such as ‘Phantom of the Opera’, ‘Les Miserables’ and ‘The Woman in Black’. The production will continue to delight audiences on tour around the UK. 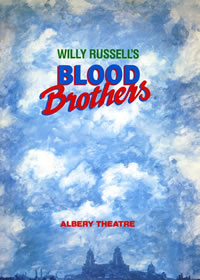 Blood Brothers begins with a tableau of Mrs Johnstone crying over the bodies of twin sons Eddie and Mickey who both lie dead onstage. A sinister Narrator then begins to tell their story, starting with Mrs Johnstone’s likeness to Marilyn Monroe and her ability to give birth to children. In a rough part of Liverpool, Mrs Johnstone finds out she is pregnant once again, adding to her already heavy woes. She works as a cleaner for the wealthy Mrs Lyons and the two share an informal relationship. Mrs Johnstone is extremely superstitious and is scared of Mrs Lyons putting new shoes on the table. After a visit to the doctor she is told she is actually having twins and worries about how she will cope. Mrs Lyons, who can’t have children, begs her to give one to her as soon as they are born. They make a pact and swear on the Bible, and Mrs Lyons plays on Mrs Johnstone’s superstitious feelings.

As soon as the twins are born Mrs Lyons takes one of the boys and Mrs Johnstone instantly regrets her decision. She takes comfort in the fact that at least one of her children will live a life of luxury.

Time passes and Mrs Johnstone’s children play kids games in the street. Mickey has now grown up to 7 years old and is taunted by his older brother Sammy. Mickey’s twin Eddie comes to join in and the pair bond over their similar birthday. Mickey asks Eddie to be his best friend and they decide to be ‘blood brothers’ making a pact to stay together and be friends. Mickey introduces Eddie to Linda and the three get up to trouble in the park. As the police take Eddie home, they treat the Lyons’ family very differently to the Johnstone’s who are frequently getting in trouble with the law. Mrs Lyons is worried about Eddie spending time with Mickey and tells him he is not allowed to see him any more. She pesters her husband to move away.

Eddie goes to visit Mickey to tell him they are moving away. He finds Mrs Johnstone and she is emotional seeing her son all grown up. Eddie is sad to leave his new best friend behind. Mrs Johnstone is told by the council that they are being rehoused the country that coincidentally moves them closer to the Lyons family once again. The Johnstone’s are happy at the prospect of a new life and a ‘Bright New Day’.

Act Two opens some years later as Mickey and Eddie are now 14 and at school. Mickey is pursued by Linda and bumps into Eddie again and they continue their friendship. Mrs Lyons feels threatened by the Johnstone’s reappearance in her life and begins to go mad. She goes to visit Mrs Johnstone and tries to buy her off, attacking her with a kitchen knife. She is consumed by the guilt of taking a baby from its mother.

As Eddie and Mickey grow up they begin to get further and further apart. Eddie goes away to university whilst Mickey is stuck in a low paid job. Linda tells him she is pregnant and they struggle for money. Mickey resents Eddie’s lifestyle with his posh house and posh job, and after being laid off by the factory, Mickey is convinced by Sammy to act as an accessory in an armed robbery. The robbery goes wrong and Mickey is put in prison.

Mrs Johnstone tells how Mickey gets depressed after his stint in jail. He becomes addicted to pills. Eddie and Linda begin to spend time together and it is obvious to everyone that there is a spark between them. Mickey noticed and becomes jealous, grabbing a gun to threaten Eddie at work. Mrs Johnstone chases after him and in the council chamber of Eddie’s work tells Mickey not to shoot his brother. The boys are shocked at the news as she is forced to tell them they were separated at birth. Mickey yells at her, asking ‘why didn’t you give me away – I could have been him’ and shoots Eddie, and is shot by the police. Mrs Johnstone is left onstage with the two dead bodies.