Waitress is the smash-hit, new Broadway musical, written by singer-songwriter Sara Bareilles. Based on the 2007 film of the same name, Waitress follows Jenna, who works in a diner and bakes pies that reflect her life and emotions. Featuring a folk-inspired score that has been praised by audiences and critics alike, Waitress has taken Broadway by storm. With songs such as “What’s Inside”, “Bad Idea” and “She Used to Be Mine”, the musical stars Jessie Mueller in the lead role, after she previously starred as Carole King in Beautiful. When Jenna realises that she is pregnant with her controlling husband’s baby, she quickly realises that she needs a way out. Meeting her new physician, Dr Pomatter, Jenna begins to think that life might just be better than it seems. 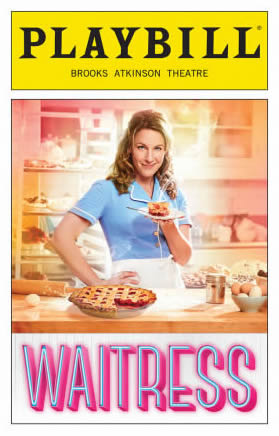 Sara Bareilles’ colourful new musical Waitress, based on the 2007 film of the same name, makes a smash-hit on Broadway.

Based on Adrienne Shelly’s 2007 film of the same name, Waitress follows Jenna, a waitress working in Joe’s Pie Diner in southern America. Trapped in a controlling marriage with husband Earl, she lives her life baking and selling pies with unusual titles. Jenna dreams of running away from her marriage, slowly gathering up the money to do so. Pinning her hopes of winning a large sum on the annual pie contest in a nearby town, she begins to dream big. Quickly her dreams are dashed when she discovers that she is pregnant with her husband’s baby.

With Jenna’s only friends being co-waitresses Becky, Dawn and regular customer Joe, her life changes when she meets her new physician Dr Jim Pomatter. Dr Pomatter has moved to the new town to accommodate his wife, who is completing her residency at the local hospital. Instantly, the pair are attracted to each other, and over the course of pre-natal appointments, Jenna and Dr Pomatter develop an attraction towards each other. On an unlikely evening, Jenna initiates an affair. When she is given a journal, Jenna begins to document her life and begins to reveal her thoughts through baking some increasingly peculiarly-named pies.

Meanwhile, after some persuasion, her fellow waitresses decide to embark upon romance themselves. Dawn meets Ogie, who both become so smitten with each other that they almost immediately vow eternal devotion. And whilst Becky’s marriage is not entirely fulfilling, due to her much older husband being very ill, her endless disputes with Joe’s Diner’s manager Cal lead to a more interesting romance of her own.

After Jenna gives birth to her baby girl, she gains the courage to leave her husband and begins to believe in herself a bit more. When leaving the hospital, Dr Pomatter chases after her, but she decides to end that too. She begins to serve brightly-coloured pies to her customers at a new diner where she works.