Hamilton is the Tony Award-winning Broadway musical, written and composed by the legendary Lin-Manuel Miranda, who starred as the title role for the show’s opening year. Inspired by rap and hip-hop, Hamilton follows the story of America’s founding father Alexander Hamilton, documenting his tumultuous relationship with Eliza Schuyler and his untimely death at the hands of Aaron Burr. Based on Ron Chernow’s book ‘Alexander Hamilton’, Miranda uses his real life story with a pinch of dramatic license to create one of Broadway’s biggest musicals. Unlike standard shows, Hamilton is composed of rap, ballads, hip-hop and musical theatre to create a smash-hit, record-breaking production. 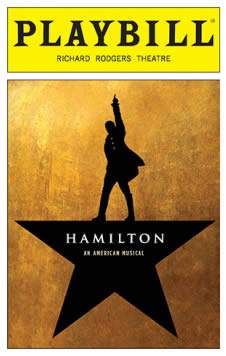 Based on the real life of America’s founding father Alexander Hamilton, the musical opens with the company giving an introduction to Hamilton’s early life as an orphan in the Caribbean. In 1776, Hamilton seeks out Aaron Burr but rebuffs his philosophy, instead joining the company of three revolutionaries: John Laurens, Marquis de Lafayette and Hercules Mulligan. Impressing them with his speech skills, the quartet begin dreaming of their cause.

Meanwhile, the Schuyler sisters roam the streets of New York as the spirit of revolution builds in the air. A message arrives from King George in England, reminding them that he is willing and able to fight for the cause of the colonists. When the revolution begins, Hamilton, Burr and their friends join the army, who end up retreating from New York City. George Washington realises he needs help and enlists Hamilton as his right hand man, despite Hamilton wanting to fight on the front lines.

In 1780, the men attend a ball, where Eliza Schuyler instantly falls in love with Hamilton, as does Angelica. Angelica swallows her feelings for the sake of her younger sister, and Eliza and Hamilton soon marry. Burr privately admits to Hamilton that he’s having an affair with the wife of a British officer and Hamilton advises him to take action. Burr chooses to wait and see what his life has in store for him.

As revolution is rife, Hamilton asks Washington to give him command, which is given to Charles Lee instead. This proves catastrophic at the Battle of Monmouth, where Lee orders a retreat. Lafayette is promoted to replace Lee, which causes him to spread rumours about Washington. Hamilton is offended and Laurens offers to duel Lee for him. Washington finds out that Lee has been injured and orders Hamilton to return home to Eliza, who tells him that she is pregnant with his child. Lafayette convinces France to join the American cause, and the war begins to play in their favour. They realise that they need Hamilton and reluctantly order him back to cut off the British navy at Yorktown.

After days of fighting, the British surrender at Yorktown, and King George asks how the rebels expect to successfully govern their people. Soon, Hamilton’s son Philip is born and Burr’s daughter, Theodosia, is also born. Hamilton and Burr return to New York to pursue careers as lawyers and Burr becomes increasingly annoyed by Hamilton’s constant success. When Hamilton is chosen as a delegate to the Constitutional Convention in 1787, Burr refuses to assist him. Hamilton is soon chosen to be Treasury Secretary for the newly appointed President Washington.

In 1789, Thomas Jefferson returns to the US as Secretary of State. Madison asks for Jefferson to help him stop Hamilton’s financial plan, which Madison believes will give the government too much control. Washington pulls Hamilton aside to force him to figure out a compromise. When he returns home, Angelica advises Hamilton to convince Jefferson that his plan is a good idea. Angelica and Eliza ask him to accompany them on a vacation, but he refuses, saying he needs to work.

When alone, Hamilton is visited by Maria Reynolds, who seduces him and they begin an affair. Her husband soon finds out and begins to blackmail Hamilton, who continues the affair. Hamilton discusses his financial plans with Jefferson and Madison, resulting in the Compromise of 1790, which moved the US capital from New York to Washington D.C. Burr is envious of Hamilton’s power and wishes he had the same. Burr switches political parties and beats Eliza’s father in a race for his seat in the Senate, causing Hamilton and Burr to fall out. Burr, Jefferson and Madison become irritated that Washington continues to back Hamilton, and they look for a way to damage Hamilton’s reputation.

Washington informs Hamilton that Jefferson has resigned to run for president, and he will be stepping down in the role. King George receives the news and gets ready for the US to fall under John Adams’ leadership. Adams and Hamilton fall out and destroy their party, whilst Burr, Jefferson and Madison believe that they have discovered Hamilton embezzling government money. In reality, the money comes from his affair with Maria Reynolds and Hamilton tells them of his affair, begging them not to tell anyone. Concerned that they know his secret, Hamilton publishes a public admission about the affair in hopes to save his political legacy. However, his reputation is destroyed and Eliza burns all of their letters, ruining Hamilton’s chance of being redeemed in the future.

After a number of years, Hamilton’s son Philip challenges a man to a duel after hearing him slander his father, but is shot. Philip dies and Hamilton begs for Eliza’s forgiveness. In 1800, Jefferson and Burr are tied in the race for president and Hamilton throws his support behind Jefferson, who ends up winning by a landslide. Burr challenges Hamilton to a duel and shoots him in the chest. Burr laments that even though he survived the duel, he is cursed to be the villain, only to be remembered as the man who killed Alexander Hamilton.

As the musical draws to a close, the company summarise Hamilton’s life, noting that no one has any control over how they will be remembered. Washington, Jefferson and Madison all praise Hamilton’s work. Eliza reveals that she fought to save her husband’s legacy, by opening an orphanage. As she dies, Hamilton shows her everyone that will care for her and protect her legacy, as she did for him.