The Woman in White is an Andrew Lloyd Webber musical that opened in the West End in 2004. Based on the Victorian novel of the same name by Wilkie Collins, the show featured lyrics by David Zippel with a book by Charlotte Jones. The original production featured a set made up mainly of projections and was one of the first shows to use 3D technology which was criticised by many reviewers. The musical features a small chamber cast, which was initially led by Maria Friedman and Michael Crawford, who suffered under the constrains of his costume and had to be replaced by Michael Ball, four months into the run. The show opened on Broadway where it flopped, and is yet to be seen again. 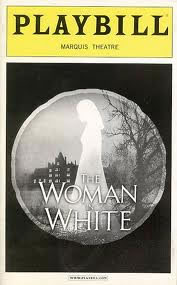 Unrequited love for a drawing teacher drives the uglier sister to protect her estate and family fortunes from Italian rogue and slimy Sir.

Walter Hartright, a drawing teacher, is on his way to Limmeridge House in the depths of the English countryside. At around midnight, he comes across a mysterious woman dressed all in white on the roadside who has an urgent secret that she needs to tell. She tells him she is escaping from someone, and in a years time there will be a death on the very railway line on which they are standing.

As Walter arrives at Limmeridge he meets his new students, Marian Halcombe and her prettier half sister Laura Fairlie. Laura is heir to the estate of Limmeridge, and Walter is instantly drawn to her. Whilst these feelings are shared by Laura, Marian also develops feelings for him and a love triangle develops. Walter tells the girls about the woman he witnessed on his way to the house. During a peasant festival, a small girl tells Hartright that she saw the ghost of a woman dressed all in white. She points to the graveyard, and whilst exploring he meets Anne Catherick who assures him that she is not a ghost. She warns him of Sir Percival Glyde, saying that is what he secret is all about.

Sir Percival Glyde arrives at Limmeridge, as Laura’s intended husband. They plan to move their wedding to the Christmas. Glyde’s best man is an Italian man named Count Fosco who is a large man, full of his own importance. He takes a liking to Marian. Walter questions Glyde about Anne Catherick and he tells him that she is a mad woman whom he tried to help, and she sees him as an enemy. Laura does not want to marry Glyde but Marian encourages her in order to honour her dying father and also leave Walter free for her. Walter is upset and leaves for London as Laura and Glyde are married.

The pair move into Glyde’s estate and Anne Catherick decides to travel to assist Laura in overcoming her husband. Laura begins to distrust Marian as it was her advice that led her to marrying an abusive and mean husband. She has now realised that he only wants her for her money in order to pay off his debts. Marian is heartbroken at the news and becomes determined to free Laura from her position.

Glyde presents Laura with a document that he wants her to sign but refuses to tell her what it contains. She is suspicious and asks about what it concerns. Glyde is furious with her although Fosco tries to calm the situation. The girls leave the estate for a walk and come across Anne Catherick. They are struck by how alike her and Laura are, and witness her being dragged off to the asylum. Marian and Laura become convinced that Glyde and Fosco are the villains that Anne speaks of.

Marian overhears Glyde and Fosco’s plans to take Limmeridge House from Laura along with their plans for Anne. That evening Marian suffers nightmares and is woken by screaming and shouting. Fosco tells her that Laura has fallen out of the window whilst sleep walking. Marian is distraught and at the funeral swears vengeance for her sister. She runs off to London to find Walter.

In London Walter is down on his luck and Marian finds him living in a run down house. He is initially angry with Marian for sending him away, but then decides he will help figure out the mystery of Anne. Fosco is pleased at how the plan is progressing but reprimands Glyde for spending more money on gambling. Walter suggests that Marian use her feminine charm against Fosco in order to find out where they are hiding Anne. She tries to seduce him, and whilst he leaves the room she finds the document with the location of Anne’s asylum. Fosco feels rejected saying that if she really were interested he would have proposed marriage.

Marian and Walter travel to the asylum to find Anne, but on arriving they find Laura in her place. Laura explains to them that Glyde locked Laura away, killing Anne and burying her in Laura’s grave. They help her escape and they all travel to Limmeridge to ask Laura’s father what he knows about Anne. Mr Fairlie has been convinced by Glyde to sign over the estate to him and he leaves on the next train. He then admits to Marian, Laura and Walter that Anne was in fact Laura’s half sister, hence why they look identical. They run to the train to try and stop Glyde.

At the station Laura dresses in white and pretends she is Anne to haunt Glyde. She discovers the secret that Glyde raped Anne and drowned their child in the lake. He tries to kill her to preserve his secret but is instead run over by a train. The prediction from a year ago has come true, and the dead lie on the tracks. Walter marries Laura and they take over Limmeridge House, leaving Marian heartbroken as the stonemason changes the name on Laura’s gravestone to Anne Catherick.