Fanny features music and lyrics by Harold Rome along with book by S. N. Behrman and Joshua Logan. The plot follows a tale of passion, secrets and intrigue set around the port of Marseille in France. The show was one of Rome’s most successful musicals of the period, and has been revived a number of times by different regional companies and fringe groups. The show starred Ezio Pinza who had previously captivated audiences in South Pacific, and the original production ran for a solid 2 years. 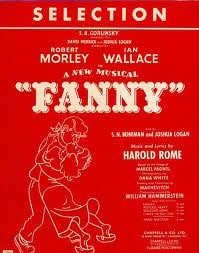 Adapted for the stage by Joshua Logan and S.N. Behrman

In Marseille, teenaged lovers Fanny and Marius are encouraged to marry by Marius’ tavern-keeper father Cesar, who hopes his son will follow in his footsteps. Marius loves Fanny, but wants the chance to leave the town for an adventure and longs for a life at sea. Cesar is furious and disowns Marius. Fanny, however, understands and allows him to go, though their passionate farewell almost makes him change his mind. After he leaves, she discovers she is pregnant with his child.

An older, wealthy man in the town, Panisse, has previously tried to marry Fanny, but she formerly spurned his advances. Desperate to avoid a scandal, she now approaches him, and he agrees to marry her. He is moreover thrilled at the prospect of a son and decides to raise him as his own, hoping he will one day take over his sail-making business. The child is indeed a boy and named Cesario.

Panisse and Cesar are good friends and look after Cesario after he is born. On the boy’s first birthday, Marius returns suddenly and attempts to claim Fanny and Cesario. Fanny is unable to refuse him outright, but Cesar manages to run him out of town.

Twelve years later, Cesario is now an adolescent and longs to be a sailor like his father before him. He runs away to find Marius at sea, and Parnisse, heartbroken at losing Cesario, retreats to his deathbed. Marius brings Cesario back home, and Parnisse’s dying wish is for Marius and Fanny to be together at last.