Cabaret is a musical based on the Christopher Isherwood novella ‘Goodbye to Berlin’, and the Druten play ‘I am a Camera’. The show is set in a nightclub in 1930s Berlin just as the Nazi party begin to rise to power. Featuring music by John Kander and lyrics by Fred Ebb, the show has been revived countless times in both London and New York, but is perhaps most well known for the 1972 film adaptation which starred Liza Minelli. The show has gone through various re-writes, with new songs added for each new production. Numbers were written specifically for the film, and in many new productions these are now added to the musical. Many famous faces have played the lead roles over the years, from Dame Judi Dench to the late Natasha Richardson, Alan Cumming, Neil Patrick Harris and singer Will Young. 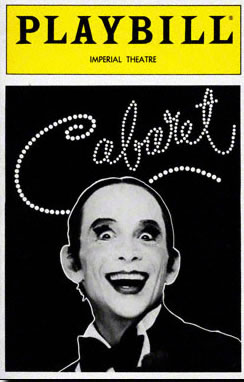 Cast: Kelly Hunter as Sally, Peter Land as Cliff and Wayne Sleep as the Emcee

An American in Berlin stumbles across a British singer in a seedy club with a sexually ambiguous Emcee whilst the Nazi’s rise to power.

In 1930s Berlin, a young American writer steps off the train and finds his way to the seedy Kit Kat Klub which is presided over by a sexually ambiguous Emcee who introduces the venue and the Cabaret girls. He is directed to Frau Schneider’s boarding house and she haggles with him over how much he has to pay to stay there. Back at the club, Cliff is introduced to a British singer Sally Bowles ‘the toast of Mayfair’ who performs various racy numbers. Cliff offers to take her home, but she is worried about what her boyfriend might say. Cliff earns a living teaching English in the boarding house and Sally arrives looking for a place to live. She decides to stay with Cliff as the Emcee muses on their living conditions. Herr Schultz is an older Jewish man who owns the fruit shop below the boarding house. He is attracted to Fray Schneider and brings her the exotic gift of a pineapple.

The Nazi presence on Germany begins to grow, and even in the club a song is turned into a Nazi march. As months go by, Cliff begins to wonder about his situation with Sally, and as she reveals she is pregnant and wants an abortion, he is shocked. He agrees to take a risky job to bring in some more money for the couple. Meanwhile, Herr Schultz proposes to Fraulein Schneider, after she argues with a lodger who continually sleeps with a wide variety of different men. At the couple’s engagement party, anti-Semite feeling is expressed, and a Nazi anthem is sung as many of the characters helplessly look on.

As Frau Schneider grows more worried about marrying a Jewish man, Schultz’s shop is attacked but he refuses to acknowledge the trouble he is in. The Emcee performs a song at the club about loving a Gorilla, challenging their perception about mixed relationships. Schneider tells Sally and Cliff that she is going to call off the wedding, and refuses to listen to Cliff’s reasoning. Sally refuses to move to America with Cliff and their child and rushes back to club. Cliff is beaten up by Nazi’s and dragged out of the club, whilst Sally sings of that ‘life is a cabaret’.

As Cliff prepares to leave, Sally tells him about the abortion and he hits her. He promises to use her in his book that he begins to write as his train pulls away from Berlin. The Emcee bids farewell to the audience, and the company reveal concentration camp uniforms complete with a yellow star of David and a pink triangle.