The Wild Party was one of two musicals of the same name to open in the 2000 Broadway season. Whereas LaChiusa’s production opened on Broadway, the Andrew Lippa version opened off Broadway. Both use the same source content of the 1928 Joseph Moncure March narrative poem. The show is told in vaudeville style comprising a small number of vignettes which come together to tell an overall story. Each thread slowly comes together and develops into an orgy followed by a tragedy. The original Broadway production had an all star cast which saw Eartha Kitt return to the stage. The music is set within the 1920s style, using the typical conventions of musical theatre. Despite the show’s lack of popular appeal it is regularly performed by regional, stock and amateur companies in both the UK and USA. 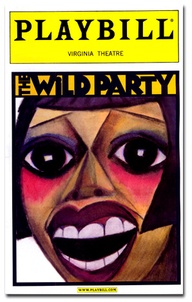 the poem by Joseph Moncure March

In 1920’s Manhattan, Vaudevillian star Queenie plans to host a party, in part so she can humiliate her abusive lover, Burrs. She invites a long list of their eccentric friends, including ageing star Dolores, a bisexual playboy named Jackie, black boxer Eddie and his white wife Mae, Mae’s underaged siste, Nadine, Oscar and Phil D’Armano, gay brothers who are also a couple, lesbian stripper Madelaine and her morphine-addict girlfriend Sally.