Show Boat is a two act musical by Jerome Kern and Oscar Hammerstein, originally opening in 1927. The musical follows the lives of workers and passengers on a steamship in the Mississippi River named ‘Cotton Blossom’ from 1880 – 1927. The show is one of the earliest examples of a book musical and was regularly revived and performed in various versions throughout the twentieth century. Controversy now surrounds the show due to its depiction of racial issues, something that changes from production to production. Songs from the musical such as ‘Ol Man River’ and ‘Can’t Help Lovin’ Dat Man’ have become famous in their own right and have been covered by various pop artists in the billboard charts. A stunning Hal Prince revival was the last Broadway production. 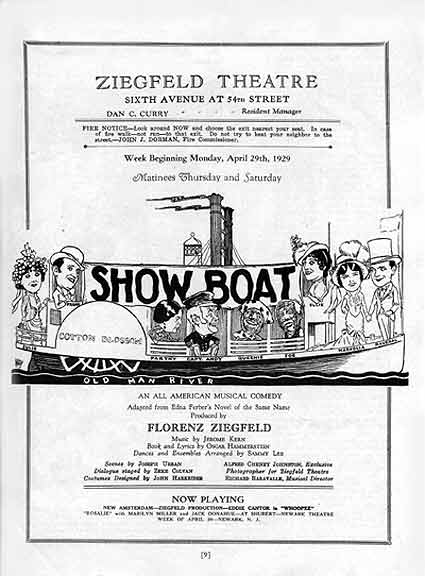 the novel by Edna Ferber

The show boat “Cotton Blossom” arrives in Mississippi in 1887, and locals flock to see the new musical revue that is visiting their town. Cap’n Andy greets the crowd warmly, until his leading man, Steve, gets into a fight with Pete, an engineer who has been eyeing Steve’s leading lady and wife, Julie. As the fight is broken up, Pete vows revenge and claims he knows a secret about Julie that will destroy their lives. Cap’n Andy convinces the crowd this is all part of their act, and invites them along to the main show.

Gaylord Ravenal, a riverboat gambler, arrives at the ship and spots Cap’n Andy’s daughter Magnolia. He tries to woo her and they agree to “Make Believe” they are in love. Magnolia finds Gaylord exciting and asks one of the African-American deckhands, Joe, for his advice. He warns her that there are a lot of men like him on the Mississippi, and he and his co-workers sing that “Ol’ Man River” keeps rolling along, not stopping for anyone.

Magnolia tells Julie that she is in love with the handsome stranger, Gaylord. When Julie suggests that he may not have any money at all, Magnolia replies that she would just stop loving him. Julie explains that love is not that simple, and begins to sing “Can’t Help Lovin’ Dat Man.” Joe’s wife, Queenie, hears her singing and is surprised to hear a white woman singing what a song she has only heard black women sing, but joins in nonetheless. Meanwhile, fellow actors Ellie and Frank reflect on “Life Upon the Wicked Stage.”

That night, Steve and Julie are warned that the Sheriff is on his way to arrest them, and Steve cuts Julie’s hand and drinks a drop of her blood. Pete arrives with the Sherriff and announces that Julie is mixed race, and their marriage is therefore illegal due to the prejudiced miscegenation laws of the day. Steve is able to claim that he has black blood in him and their marriage is therefore valid. Nevertheless, they can no longer continue to star on the Show Boat as they are now considered African-American. Cap’n Andy fires Pete for his betrayal and sadly bids Steve and Julie farewell. He hires Gaylord to be his new leading man, and chooses to have him star opposite Magnolia.

Gaylord and Magnolia slowly fall in love for real (“You Are Love”), much to Magnolia’s mother Parthy’s dismay. The couple decide to get married while Parthy is out of town, but she arrives just in time to interrupt the service after discovering Gaylord has killed a man, but it turns out he was found not guilty, and they manage to get married in the end.

Six years later, Gaylord and Magnolia are living in Chicago, where Gaylord is making a living as a gambler. They are still very much in love (“Why Do I Love You?”), and ten years later they have a daughter named Kim. Gaylord’s gambling has spiralled out of control, and they end up living in a filthy tenement. Finally unable to cope with getting his family into this situation, Gaylord leaves Magnolia. With a young child to feed, Magnolia seeks a job and runs into Frank and Ellie, who are working in Chicago at the Trocodero club, and they manage to get her an audition. Meanwhile, Julie is also singing at the club, but has become an alcoholic after Steve left her. She hears Magnolia auditioning for a job with the song “Can’t Help Lovin’ Dat Man” and immediately recognises her voice. She decides to quit in secret so that Magnolia can take over her job.

Cap’n Andy and Parthy come to visit Magnolia and Kim in Chicago. Andy visits her at the club, where she has a disastrous performance. He manages to rally the crowd into singing along to “After the Ball,” and Magnolia manages to become a major star. Twenty years later, Andy happens to run into Gaylord and encourages him to reconnect with Magnolia. Kim, meanwhile, has become a Broadway star, and Gaylord and Magnolia watch her with pride as they decide to rekindle their long lost love.