Titanic the Musical was a surprise hit on Broadway, from the pen of composer Maury Yeston and Peter Stone. Based on the disaster itself, and not the famous film, the show won 5 Tony Awards alone with the trophy for Best Musical. The original production featured an enormous cast who between them depicted the various classes of passengers aboard the ship, crew and captains. The show integrates a number of different stories together, culminating in the disaster in the second act of the show. The challenge of making the ship sink onstage proved difficult throughout previews, and many technical problems happened throughout the show. The musical opened with mainly negative reviews, but thanks to good audience word of mouth and the Rosy O’Donnell talk show, it managed to build stronger advances. After the 1997 James Cameron film was released the show received a welcome boost and managed to play into 1999, closing after 804 performances. The show has not been seen professionally in London, although ambitious amateur theatre companies often produce the show in the UK. 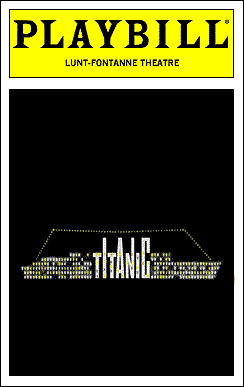 The Titanic’s architect, Thomas Andrews states that “In Every Age” humankind has been able to achieve something great, and he is pleased his ship will be included in history books. The crew including lookout Frederick Fleet, coal stoker Fred Barrett, and telegraph operator Harold Bride arrive and board the ship excitedly. Next, Andrews, the ship’s Captain E.J. Smith, and its owner J. Bruce Ismay board the largest moving object ever made. Finally, the passengers arrive as the ship prepares to set sail. The second and third class passengers are thrilled to be on board (“I Must Get on that Ship”), while the “First Class Roster” boasts a veritable who’s-who of high society.

On board, Ismay encourages Smith to increase the ship’s speed so they can make a surprise arrival in New York a day earlier. Smith reluctantly agrees, and Barrett, now at work in the boiler room, believes this is the wrong decision (“Barrett’s song). Second class passenger Alice Beane wishes she could experience the opulence of the first class cabins, whilst her husband Edgar is enjoying being on the ship in the first place. Charles Clarke is eloping to America with his fiancée Caroline Neville against her father’s wishes. Meanwhile in class, everyone is delighted with how much their colleagues have been able to achieve (“What a Remarkable Age This Is!”). In third class, Irishwoman Kate McGowan falls for Jim Farrell who is travelling in her group to a better life in America.

Ismay insists on the ship going faster, despite Andrews’ protestations, and Captain Smith gives in. He praises 1st Officer Murdoch’s skills as he leaves him at the ship’s helm, but Murdoch worries he is not yet ready “To Be a Captain.” Barrett meets Bride in the wireless room and asks him to send a message proposing to his girlfriend.

The following evening, Alice sneaks into the first class and joins them dancing “The Latest Rag.” Edgard is mortified and retrieves her. The brisk April night is very cold and in the lookout, Fleet worries about his decreased visibility (“No Moon”). Kate brings Jim to the top deck to reveal that she needs to get married as she is carrying the child of a married man. He immediately agrees to marry her. As an elderly couple, Isidor and Ida Strauss talk about their hopes and dreams, the first class passengers enjoy the evening’s festivities. Out of nowhere, Fleet spots an iceberg and warns Murdoch, who tries to turn the ship in time. He is too late, and the Titanic collides with the iceberg.

The ship’s crew begins to wake up the passengers and urge them to put on their life vests (“Wake Up, Wake Up”). Captain Smith reaches the bridge and sends Andrews to look at the damage to the “unsinkable” ship. Bride begins sending distress calls to local ships. Andrews is devastated to report that the damage is too much for the ship to endure, and it will sink, reminding Smith and Ismay that there are only enough lifeboats for half the passengers on board.

The first class passengers are irritated at being woken up and firmly believe that nothing is wrong (“Dressed in Your Pyjamas in the Grand Salon”), further compounded by the crew’s reassurance. Suddenly items in the dining room begin rolling to one side, signalling that the ship has started to sink. The crew begins to facilitate the evacuation, leading the first class to the lifeboats first.

Kate, Jim, and their friends are desperate to find a way out of the lower levels of the ship, and Barrett leads them up “The Staircase” to safety. Bride sadly tells Smith that the only ship in the area is the Carpathia, which will not arrive before the ship sinks. Ismay, Andrews, and Smith argue over who should accept “The Blame” for the disaster. Women and children have begun rushing “To the Lifeboats,” leaving the men behind. Murdoch tells Fleet and Barret to board the last boat to row, but as Barrett cannot row a boat, he insists that Jim take his place.

Many passengers are forced to say tearful goodbyes to their family members (“We’ll Meet Tomorrow”), and finally those that remain on board are forced to accept that they are doomed. Ida and Isidor Strauss who have remained on board, relish that until their final moments, they “Still” have each other. Andrews continues to look at the designs of the ship to find where he went wrong as the ship sinks out of sight.
The Carpathia arrives and rescues the survivors, who are devastated at their losses. They wonder what could have been done differently, but hope that their shaken dreams of a better world will come true one day.