Annie Get Your Gun features music and lyrics by Irving Berlin with a book by siblings Dorothy and Herbert Fields. Based on the real life of Annie Oakley, a famous sharpshooter who starred in Buffalo Bill’s Wild West Show, Annie Get Your Gun combines true and fictional events in this renowned musical. Following her tumultuous romance with fellow performer Frank Bulter and the events leading up to her joining Buffalo Bill’s show, this musical has enjoyed numerous revivals around the world. Songs from the score are instantly recognisable, with hits such as “There’s No Business Like Show Business”, “Anything You Can Do” and “You Can’t Get a Man with a Gun” making up the majority of musical theatre repertoire. Stars such as Ethel Merman, Bernadette Peters and Ruthie Henshall have starred productions as the title role. 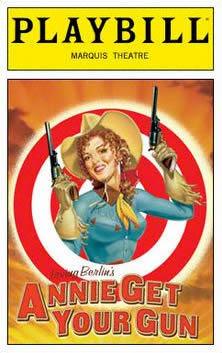 Famous sharpshooter Annie Oakley falls for showbiz man Frank Butler, and the pair embark on a journey that causes them to fall deeply in love.

Colonel Buffalo Bill brings his famous Wild West show to Cincinnati, wherein the leading man Frank Butler challenges anyone in town to a duel. Foster Wilson, the owner of the hotel where the performers are staying is not pleased with their antics and bets Frank he can find someone who can out shoot him. Sharpshooter Annie Oakley arrives in town and, impressed by her shooting, Foster persuades her to face Frank in the shoot-off.

Annie runs into Frank, not knowing he will be her opponent, and immediately falls for him. She asks if he feels the same way, but he declares he wants a woman who is soft and fragile. They meet again at the shoot-off, and Frank is furious when Annie wins. Buffalo Bill manages to convince Annie to join the show permanently by explaining “There’s No Business Like Show Business” and she agrees.

On the road, Frank begins to fall in love with Annie. The show stops in Saint Paul, Minnesota while the rival company Pawnee Bill’s Far East Show is stopped in nearby Minneapolis. Buffalo Bill asks Annie to perform a special trick to draw people to their show, and she agrees, as it will surprise Frank. Meanwhile, Frank plans to propose to Annie after that night’s show. Annie’s trick goes down a storm, and green with envy, Frank decides to join the rival Pawnee Bill’s show instead and leaves Annie behind.

Buffalo Bill takes the show across Europe with Annie as the star, but both his company and Pawnee Bill’s shows go bankrupt. The two impresarios agree to meet to discuss a merger, with each thinking the other has money to pay for both companies. Annie still misses Frank. When it is revealed that neither company has any money, Annie decides to sell her many shooting medals which have a combined worth of one hundred thousand dollars, declaring she only needs the simple things in life.

Frank and Annie reunite and immediately fall back in love. They decide to finally get married, but they both want very different things for the wedding. When Annie shows Frank her medals, he becomes furiously jealous once again. They agree to a final duel to settle the score. Annie and Frank both deliberately miss their shots so the shoot-off ends in a tie, and they run off to be married as both shows carry on together.

Please note: Revised editions of the musical may not contain some songs mentioned above and may contain new songs.

1999 Tony Awards: Best Revival of a Musical, Best Performance by a Leading Actress in a Musical (Bernadette Peters)