The Secret Garden is a musical based on the popular children’s book of the same name by Frances Hodgson Burnett. Set in Yorkshire at the start of the 20th Century, the story has become a timeless classic. After the original Broadway production the show enjoyed success in both Australia and the UK, where it was produced by the Royal Shakespeare Company. Rebecca Luker and Mandy Patinkin were in the original Broadway cast and feature on the soundtrack. Songs such as ‘Lilly’s Eyes’ have become Broadway standards and are regularly performed out of context. 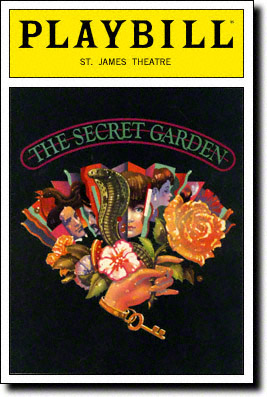 the children's book by Frances Hodgson

Mary Lennox is a 10 year-old English girl, who was born and raised in India, is shipped back to her relatives in Yorkshire when her parents die of cholera. She arrives at a large manor house owned by her uncle, Archibald Craven. His own wife, Lily, died many years ago, and he is afflicted with a hunchback. He has become a recluse while his brother Neville manages the estate, which remains haunted by ghosts including Lily and Mary’s parents.

Mary is greeted by the solemn housekeeper Mrs. Medlock and begins her new life at “The House Upon the Hill.” She remains frightened and alone on her first night in the creaking manor (“I Heard Someone Crying”). The next morning, she befriends a chambermaid named Martha, who encourages Mary to explore the grounds of the estate. She finds the garden which is designed by a maze, and meets Martha’s brother Dickon and the head gardener, Ben. Ben tells Mary about a secret garden that Archibald has ordered to remain locked as it reminds him of Lily. Dickon teaches her to talk to the animals, and she follows a robin to the hiding place of the secret garden’s key (“Show Me the Key”).

Archibald finally agrees to meet Mary, and he is taken aback when she asks for “A Bit of Earth” to plant a new garden. She immediately reminds him of Lily, who designed the large garden on the grounds. Neville also notes she has “Lily’s Eyes,” and reflects on his unspoken love for her. That night, Mary is again awoken by crying and follows the noise to find Colin, her cousin, who has been kept in bed since his birth because his father was concerned he too would grow a hunchback. They talk of his dream of “A Round-Shouldered-Man” who reads him stories, but Mrs. Medlock discovers them and tells Mary she is never to see Colin again. Frightened, Mary runs out of the house in the midst of a storm and happens upon the door to the secret garden.

Mary hopes to rebuild the garden so she has a place to explore, and dreams of growing up well (“The Girl I Mean to Be”). Archibald tells Neville that he has dreamed of Mary and Lily together in the garden. Neville hopes to be Archibald’s heir, and as a result continues to advise that Colin remain bedridden. He encourages Archibald to head to mainland Europe for a while and leave him in charge. Archibald agrees, and reads a story to his beloved Colin before leaving (“Race You to the Top of the Morning”).

The secret garden has fallen in disrepair after not being used for a decade, and Mary asks Dickon to help her grow it again. After weeks of hard work, the garden is in a much better state, and Mary encourages a reluctant Colin to leave the house in a wheelchair to see it. Neville is furious and tells Mary he will send her to a boarding school. She is devastated at the prospect of leaving the house, but Martha encourages her to “Hold On.” Mary decides to write a letter to Archibald to ask him to return (“Letter Song”).

On receiving Mary’s letter, Archibald feels lost and helpless (“Where in the World”), but Lily’s ghost arrives to convince him to go back to England (“How Could I Ever Know”). He does, and upon his return, he finds Colin up and running through the secret garden. He recognises the transformative power Mary has had on his home and adopts her as his own child.