Rodgers and Hammerstien’s musical take on the classic fairy tale stated life as a made for TV movie. One of their first shows to be created not directly for the stage, Cinderella was a huge hit and has been remade a further twice after the original Julie Andrews starred in the original 1957 film, which was updated 40 years later to include Bernadette Peters and Whitney Houston. Many of the songs became hits, including ‘In My Own Little Corner’ and ‘Stepsister’s Lament’. The show has enjoyed success in many forms, and in the UK many of the songs were used in more pantomime versions traditional at Christmas time in regional theatres. A brand new Broadway production is scheduled to open in 2013 at the Broadway Theatre starring Laura Osnes in the title role. 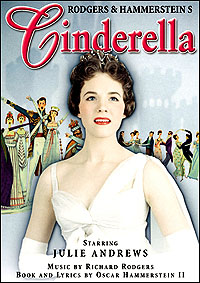 the fairy tale by Charles Perrault

Cast: Julie Andrews as Cinderella, Jon Cypher as The Prince, Howard Lindsay as The King, Dorothy Stickney as The Queen, Edith Adams as the Fairy Godmother, Kaye Ballard and Alice Ghostley as stepsisters Portia and Joy, Ilka Chase as the Stepmother.

In a kingdom far, far away, “The Prince is Giving a Ball” to celebrate his 21st birthday. All of the eligible girls in the land are thrilled at the prospect of being his bride. Cinderella’s father has died, leaving her in the hands of her evil stepmother who treats her as a servant, ordering her to cook, clean, and look after her two wicked stepsisters.

Cinderella dreams of a better life for herself, though she knows the idea is far-fetched (“In My Own Little Corner”). Meanwhile, the King and Queen, as well as their servants, are preparing for the ball. The Prince is a bit anxious about finding a bride, but the King reassures him. Cinderella’s stepsisters get ready for the ball, each confident she will win the Prince over. They laugh at Cinderella’s dream of attending, and set off without her.

Cinderella is surprised by the arrival of her Fairy Godmother, who transforms her dress into a beautiful ball gown, a pumpkin into a carriage, and mice into footmen (“Impossible; It’s Possible”). She also gives Cinderella beautiful glass slippers, but warns her god-daughter that she must leave the ball by midnight or the magic will wear off.

Arriving at the ball at 11:30, Cinderella immediately attracts the attention of everyone in the palace, including the Prince, who has been bored by all of the girls so far. He immediately asks her to dance and they fall in love at first sight (“Ten Minutes Ago”). Not recognising Cinderella, the stepsisters are extremely jealous that the prince would fall in love with someone they don’t even know (“Stepsisters’ Lament”). The Prince confesses his love for Cinderella (“Do I Love You Because You’re Beautiful?”) before they kiss, just as the clock strikes midnight. Cinderella dashes off, leaving one glass slipper behind.

The next day, the stepsisters regale Cinderella with stories of the ball (“When You’re Driving Through the Moonlight”). Despite being unable to snag the Prince, both agree it was “A Lovely Night.” The Prince begins a quest to find the mysterious girl he met the night before. His servants help with “The Search” by trying the slipper on every girl in the kingdom. Cinderella heads to the Palace’s garden to try to catch a glimpse of the Prince. The palace ministers arrive at Cinderella’s house and find the slipper does not fit either of her stepsisters. The court returns to the palace empty-handed, before Cinderella is discovered in the garden and arrested. With a little help from the Fairy Godmother, the Prince decides to try the slipper on Cinderella and immediately recognises her as his love. They get married and live happily ever after.