The Scottsboro Boys was one of the last collaborations between John Kander and Fred Ebb before Ebb’s death. The musical features a book by David Thompson and is based on the Scottsboro Boys trial. The piece is set up like a minstrel show, in which the cast tell the story led by a white Interlocutor. The original Broadway production was directed by Susan Stroman and opened at the Lyceum Theatre in 2010, after various off-Broadway tryouts. The show was critically successful although closed early after only 49 regular performances. The show went on to be nominated for 12 Tony Awards, although failed to win in any category. The harrowing story of the black boys accused of raping two white women on a train is based on historical events, and was both emotional and harrowing. The musical has gone on to enjoy a life in regional theatres across America. 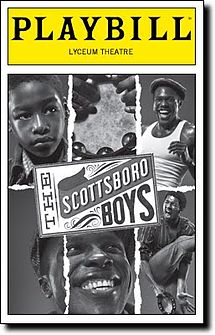 The trial of the Scottsboro boys

A lady is waiting a bus stop and begins to remember what happened to the Scottsboro Boys. Minstrels arrive (“Minstrel March”), and the Interloculator arrives to narrate the story.

In 1931, nine African-American boys are waiting at a train station. One of them, Haywood Patterson is ready to set off on an adventure “Commencing in Chattanooga.” When a train stops at the platform, two girls who have run away from home jump off, trying to escape being sent back (“Alabama Ladies”). To distract their pursuers, the girls, Ruby Bates and Victoria Price, falsely accuse all nine boys of rape, and they are promptly arrested.

At trial, they are given “Nothin’” in the way of legal counsel and as a result, they are found guilty and sentenced to death. The youngest, Eugene is frightened of the “Electric Chair,” and all of the boys wish they could just “Go Back Home.” As they are about to be executed, the Supreme Court rules that the boys did not receive adequate legal counsel, and the verdict is overturned.

A year passes by before the next trial, during which Haywood teaches himself to write. By 1933, the trial has become a major news story in the North, where it is considered a severe case of injustice given the all-white jury. A New York lawyer, Samuel Leibowitz, arrives to defend the boys as their new trial begins. The alleged victim, Ruby Bates, decides it is “Never Too Late” to tell the truth and confirms that the boys are innocent, but the prosecution then accuses the defence of paying her for her testimony.

The boys anticipate gaining their freedom as they do not believe that they can be convicted yet again for a crime that has not occurred. They dream of heading to the North, but the Interloculator reminds them to remember the South will always be home (“Southern Days”). Shockingly, the boys are found guilty again and return to prison. As his mother lies dying, Haywood escapes but is quickly recaptured.

Leibowitz remains steadfast in his defence of the boys and continues to appeal, but the they are found guilty in each retrial. Victoria Price begins to feel remorse for their continued imprisonment (“Alabama Ladies – Reprise”). In 1937, the four youngest boys have been released, and Haywood is brought up for parole, which will be decided by the Alabama governor (“It’s Gonna Take Time”). Though some suggest he should just plead guilty to get out of jail, Haywood refuses to tell a lie and is returned to prison (“Zat So?/You Can’t Do Me”). He dies in prison two decades later.

The Interloculator encourages “The Scottsboro Boys” to perform a finale. As the song ends, the lady on the bench from the introduction is revealed to be Rosa Parks, as she boards a bus and refuses to move to the back for a white man to sit down.