The Rocky Horror Show achieved cult status after the impressive 1975 film adaptation which starred the writer Richard O’Brien. The show is one of Britain’s most popular musicals and has become a worldwide phenomenon thanks to the hilarious story and catchy score, which includes the songs ‘Over at the Frankenstein Place’, ‘Dammit Janet’, ‘Hot Patootie’ and of course ‘The Time Warp’. The musical began life in 1973 at the Royal Court Theatre in an intimate production that ran for a mere three weeks. The show is a parody of B movies and follows a newly engaged couple as they take shelter in a mad house owned by a transsexual scientist. The show gained huge commercial and critical success and went on to run for over 7 years at a variety of theatre venues across London. 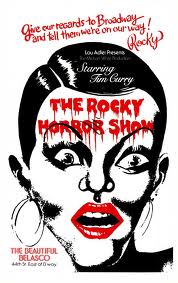 Two squares lost in the woods find shady transvestite who uses them for sex before making them endure a night of Transylvanian fun.

The show opens as an usherette invites us to see the latest picture show, (“Science Fiction”). We are introduced to squares Brad and Janet who are attending the wedding of a friend. They are inspired to get engaged themselves (“ Dammit Janet”) and decide to journey to meet their college Professor who kick started their relationship. As they set off through the woods the weather turns sour and their car breaks down. They can see a light in the distance and decide to walk towards it (“There’s a Light Over at the Frankenstein Place”). The narrator explains that the pair are scared about going to the castle but have to go as there is no other option. They meet Riff-Raff the door man and his sister Magenta and the group burst into “The Time Warp” scaring Brad and Janet who try to leave. Frank N Furter makes an entrance, a cross-dressing transsexual from Transylvania and gets the pair to go up to his lab where he has been making a man for pleasure “Sweet Transvestite”.

In the lab they are introduced to Frank’s creation – a blond half naked muscle man named Rocky who he brings to life, using half the brain of Columbia’s ex partner Eddie. Rocky considers his fate (“The Sword of Damocles”) before Frank worships his muscled body, (“Charles Atlas/I Can Make You a Man”). Eddie’s body comes out of a freezer to sing “Whatever Happened to Saturday Night?” before Frank kills him for good. Brad and Janet are then led to separate rooms for the evening.

The Narrator warns the audience that Brad and Janet may be in for a rough night. Janet accepts Brad’s sexual advances, before realising that in fact it is Frank. She continues regardless as he tells her not to let Brad know. Brad also gives into Frank’s advances thinking he is making love to Janet. Riff Raff interrupts saying Rocky has escaped and that he can be seen on the monitor. Janet runs into Rocky and seduces him (“Touch-a, Touch-a, Touch-a, Touch Me”) and the pair are caught having sex on the TV monitor. Brad is dejected (“Once in a While”) and Frank is angry. They are unable to muse for long, as Riff Raff catches sight of someone else entering the castle. It is Dr Scott, the professor Brad and Janet were travelling to see. Frank is furious as he thinks they have brought a spy, but instead Dr Scott is searching for his nephew Eddie, (“Eddie’s Teddy”). Frank traps everyone to the floor (“Planet Schmanet Janet”) and reveals that they are all aliens who gave up their mission and focused on practising kinky sex on earthlings. Magenta asks to leave, but Frank insists they put on a “Floor Show”. They perform for the group and engage in orgiastic sex.

Riff Raff stuns everyone and sets off the spaceship to take them all back to their home planet. Brad, Janet and Dr Scott are left confused (“Super Heroes”) and the narrator discusses the night’s events as the Usherette reprises “Science Fiction”.