Rodgers and Hammerstein’s most loved musical The Sound of Music has enchanted audiences all over the world. Since opening on Broadway in 1959 the show quickly became known for its recognisable score that features songs such as ‘My Favourite Things’, ‘Climb Every Mountain’, ‘Do Re Me’ and ‘The Lonely Goatherd’. The final show in the R&H cannon is perhaps their most successful, thanks in part to the 1965 film adaptation starring Julie Andrews that has been seen and enjoyed by generations all over the world. Based on ‘The Von Trapp Family’ the show tells the story of governess Maria who is sent to Captain Von Trapp’s family in Austria to look after his children during the rise of the Nazi party in Europe. The show holds records for the highest advance ticket sales in the West End when the 1981 revival opened starring Petula Clarke, and was similarly successful in 2006 at the London Palladium. 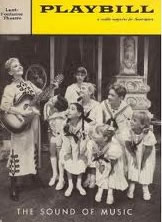 In Salzberg, Austria we are introduced to a convent where Maria Rayner is currently a novice. She is continually late for prayers and gets distracted on the hills. Many of the Nuns want her to leave the convent, but instead Mother Abbess sends her to a nearby Captain’s house who has requested a new governess for his seven children. Maria is initially alarmed at the prospect, but upon meeting the Von Trapp children is instantly charmed, despite their hostility. Captain Von Trapp is an extremely cold father and brings the children up alone. The children play a number of tricks on Maria, who begins to win them over through songs, dance and dresses made from curtains. The eldest daughter Lisel is secretly dating the delivery boy Rolf, and confides in Maria who offers advice. Von Trapp speaks of his concern at the growth of the Nazi party, but is told by his new girlfriend the Baroness that it is inevitable. The two become engaged.

Maria introduces song and laughter back into the children’s life, and gradually starts to change the Captain’s opinions on how their life should be. They begin to get closer and closer, and as the children perform at a party, Maria and Von Trapp dance together. Maria realises she has feelings for her employer, and runs back to seek solace at the convent. Mother Abbess convinces her to be secure in her work and ask for comfort in God, teaching her to ‘Climb Every Mountain’.

As the children prepare to sing on-stage they are upset without Maria in their lives. As she arrives back at their house, they are delighted to see her. The Captain is concerned at the Anschluss, but The Baroness Elsa tells him there is ‘No Way to Stop It’. She calls off the engagement, allowing Von Trapp to realise his true feelings for Maria, and the two are wed.

Pressure grows on the Captain to join the Nazi army and the family come up with a plan. During a singing competition they appear on stage together as ‘The Von Trapp Family Singers’, causing a diversion for them to escape into the Alps. They are aided by the Nuns who stalls the army, allowing them to escape and ‘Climb Evr’y Mountain’.