Sweeney Todd: The Demon Barber of Fleet Street is a 1979 musical with music and lyrics by Stephen Sondheim and a book by Hugh Wheeler. Described as a musical/opera the show was based on the play by Christopher Bond. It tells the story of Benjamin Barker aka Sweeney Todd who after 15 years of unjust incarceration returns to wreak revenge on the Judge who sentenced him. However his thoughts of revenge soon turn to wider society and he begins slaughtering his customers and with the aid of his doting land lady Mrs Lovett making them into pies. One of Sondheim’s darkest scores the musical has grown in popularity and is now considered a classic. 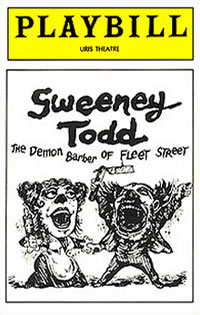 Seeking revenge Sweeney Todd returns to London he begins slaughtering his clients and with the aid of his land lady making them into pies.

The prologue sees Sweeney Todd rise from the grave to tell his story of revenge as the ensemble sing (“The Ballad of Sweeney Todd”).

The action then returns to 1846 where Sweeney Todd has just been rescued from the sea by young sailor Anthony Hope. The pair return to London (“No Place Like London”). Todd seeks to educate the naïve Anthony by telling him a cautionary tale of a man exiled by a Judge who was after his wife. (“The Barber and His Wife”). Todd then ventures to a pie shop on Fleet street owned by Mrs Lovett who tells him of her struggle (“Worst Pies in London”). Todd enquires about the flat above her shop. Mrs Lovett recognises Todd but does not let on, she replies that she does not let it as bad things occurred there. She then recounts the tale of Benjamin Barker who was sentenced to false charges so the evil Judge Turpin could have his way with Barker’s wife Lucy. She informs him that Lucy was raped by the Judge with the aid of his loyal servant Beadle Bamford. (“Poor Thing”). Todd’s reaction to her tale confirms her suspicions that he is infact Benjamin Barker. She then informs him that his wife poisoned herself and his daughter was adopted by the Judge. Mrs Lovett reunites him with his silver shaving razor that she’s kept hold of all these years and tells him he can have the room above her shop to return to the barber trade. Still plotting his revenge Todd accepts and announces that his left arm feels complete again (“My Friends”/“The Ballad of Sweeney Todd Reprise”).

At Judge Turpin’s house Joanna is imprisoned and gazing out of the window. (“Green Finch and Linnet Bird”) her song draws Anthony to her window and unaware that she is Todd’s daughter he falls instantly in love. He is harassed by the beggar woman who informs him that that Judge Turpin keeps her shut away (“Ah Miss”). The Judge and Beadle return and warn Anthony to stay away from her but Anthony vows to rescue her (“Joanna”).

In the market place pretend Italian barber Pirelli and his assistant Tobias boast about their miraculous cure for hair loss (“Pirelli’s miracle Elixir). Todd Exposes the Elixir for a sham and challenges Pirelli to a somewhat drawn out shaving contest which he wins easily. (“The Contest/Pirelli’s Entrance/Shaving Scene/Tooth-Pulling Scene”) He nominates Beadle as the Judge and impressed by Todd’s efforts he promises to come to his shop. (“The Ballad of Sweeney Todd Reprise”).

The Judge decides he is going to Marry Joanna himself (“Johanna Judge’s Song: Mea Culpa”) Todd becomes impatient when the Judge and Beadle fail to visit and Mrs Lovett informs him that good things come to those who (“Wait”). Anthony informs Todd of his plan to run away with Joanna and asks if he can use the shop as a safe house to which Todd agrees longing to see his daughter again. Pirelli and Tobias arrive and Mrs Lovett takes Tobias downstairs for a pie. Pirelli then reveals that he knows Todd’s true identity with the intention of black mailing him. In a panic Todd strangles him and then slits his throat with his razor. (“Pirelli’s Death/The Ballad of Sweeney Todd reprise”) Joanna and Anthony make plans to elope (“Kiss Me”) while the Beadle convinces the Judge that a shave from Todd will help him to win Joanna’s affections (“Ladies in their Sensitivities”)

Mrs Lovett learns of Pirelli’s murder and removes his coin purse. She and Todd plan to dispose of the body when the Judge enters. Todd plays with him lulling him into a false sense of security (“Pretty Women”) but just when Todd is about to kill him Anthony bursts in and tells Todd of his and Joanna’s plans, not realising who the Judge is. On hearing this the Judge storms out and vows never to return. Todd is furious and drives Anthony away. He then descends into madness where he makes the decision to wreak revenge on society by killing his rich and corrupt customers. (“Epiphany”) Mrs Lovett then helpfully suggests they use the victims bodies as filling for her pies (“A Little Priest”).

At the opening of Act II we see Mrs Lovett’s pie shop has become a thriving business with customers demanding more pies (“God That’s Good”). Tobias now works for Mrs Lovett as a waiter and spends a lot of his time chasing away the old beggar woman who keeps referring to Mrs Lovett as the devil. Sweeney Todd now has a nifty automated chair that allows him to kill his victims and send them straight down in a chute to Mrs Lovett’s kitchen. Todd has resided himself to never seeing Joanna again and busies himself killing anyone he’s sure will not be missed. Anthony has not given up on her though and searches London for her, while the begger woman complains of the foul smells coming from Mrs Lovett’s bakehouse (“Joanna Quartet”).

Anthony finds Joanna when he hears her singing from within the asylum but is quickly chased away by Beadle. Mrs Lovett tries to convince Todd to run away with her for a simple life (“By the Sea”) but it is clear that Todd still has designs on murdering the Judge. Anthony begs Todd to help him free Joanna from the asylum and Todd hatches a plan for Anthony to dress as a wigmaker and claim he wants to purchase the inmates hair (Wigmaker sequence/The Ballad of Sweeney Todd reprise”). When Anthony has gone Todd sends a secret letter to the Judge informing him of the plan in the hopes of luring him to the shop, the contents of which are sung aloud by members of the company (“The Letter”).

Tobias grows suspicious of Todd and states that he wants to protect Mrs Lovett (“Not While I’m Around”). He then realises she has Pirelli’s coin purse, she distracts him by showing him the bakehouse and locks him in. She then comes across Beadle Bamford who has been sent round to investigate the weird smells emitted by her chimney. Todd offers the Beadle his long awaited free shave and Mrs Lovett plays the harmonium loudly to cover the sounds of his murder (“Parlour Songs”).

Anthony rescues Joanna from the insane asylum but is stopped by the proprietor Mr Fogg. When Anthony is unable to kill him Joanna does instead and they escape. All the inmates roam the streets of London (“City on Fire/Searching”).

Joanna disguised in a sailors uniform arrives at Todd’s empty shop with Anthony. As Anthony leaves to find a coach they confirm their love for each other (“Ah Miss, Reprise”). Alone in the shop Joanna hears the beggar woman crying for the Beadle and hides just as she bursts in. On finding the beggar woman in his shop Todd slits her throat and sends her down the chute just as the Judge enters (“Beggar Woman’s Lullaby”). Todd assures the Judge that Joanna is sorry and the Judge asks for Todd to spruce him up before he is reunited with her. Once the Judge is in his chair Todd mocks him before revealing his true identity and slitting his throat (“The Judge’s Return”). Todd leaves to deal with Tobias but finds Joanna, not recognising her he nearly slits her throat but as Mrs Lovett discovers the Judge and the Beggar woman in the basement and lets out a scream Todd is momentarily distracted and Joanna makes her escape.

As Todd enters the basement he sees Mrs Lovett trying to drag the beggar woman’s body into the oven he realises in horror that she is infact his wife Lucy who had not killed herself as Mrs Lovett had said but had been driven insane and forced to live on the streets. Mrs Lovett confesses she concealed Lucy’s survival as she was in love with Todd. He pretends everything is fine and then dances Mrs Lovett into the fire, burning her to a crisp. Todd then embraces his dead wife and laments the fact that he killed her (“Final Sequence/The Ballad of Sweeney Todd Reprise”). Tobias who has been driven mad by shock picks up Todd razor and kills him just as Joanna, Anthony and the police enter.

In the Epilogue the company sing (“The Ballad of Sweeney Todd”) while the ghosts of Todd and Mrs Lovett conclude that the revenge was sufficient. Todd then exits slamming the door on Mrs Lovett.