The Book of Mormon is one of the most successful musicals of recent years. It premiered on Broadway in 2011 (where it is still going strong) and became the recipient of nine Tony Awards at that years ceremony. The show is a satire of the Mormon faith and tells the story of two naïve and optimistic young Mormon missionaries Elder Price and Elder Cunningham who are sent to a remote village in Uganda in hope of converting the local population. However they discover that the locals are being threatened by a local War Lord and have bigger problems to contend with such as AIDS, poverty and famine than worrying about religion. The Book of Mormon is written by South Park creators Tray Parker and Matt Stone and one half of the team behind musical Avenue Q Robert Lopez. Parker and Stone had previously included musical elements in South Park and numerous references to Mormons, when they met Lopez who expressed a similar interest in Mormons collaborating on the musical seemed like an obvious choice. Although slightly controversial due to its content The Book of Mormon conforms to the classic book musical structure. 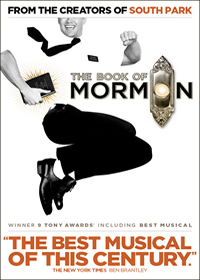 A devote Mormon is paired with a hapless partner and sent to Africa where they and the other missionaries must try and convert the local population to the Mormon faith.

Act 1
The show opens with devout poster boy missionary Elder Kevin Price leading his classmates in a door to door attempt to convert people to the Mormon faith “Hello!”. One of the missionaries, Elder Arnold Cunningham, overweight and a tad incompetent seems unable to stick to the approved script. Price’s dream is to be sent to Orlando Florida for his two year mission. He is horrified to find that he is to be paired with the hapless Elder Cunningham and sent to Uganda. “Two By Two”. Before boarding their flight at Salt Lake City Airport Elder Price, now fully committed to his given mission, speaks of how he hope to change the world and help the people of Uganda with minimal input from Elder Cunningham who thanks to rule #72 he now cannot be parted from “You and Me (But Mostly Me)”.

As soon as they arrive in Uganda the pair are robbed at gunpoint by local War Lord General Butt Fucking Naked. They are then welcomed to the village by the chief Mafala Hatimbi and the he and the villagers tell them about their plight contending with Aids, famine, poverty and the tyrannical General. The villagers sing a song “Hasa Diga Eebowai” to make themselves feel better which the Elders initially join in with however they are horrified to find out it translates as “Fuck You God”.

Hatimbi’s daughter Nabulungi introduces the disillusioned pair to the other Mormon missionaries who have so far not managed to convert anyone. Elder McKinley the district leader teaches them how to get rid of unwanted thoughts connected to Mormon Life including his own repressed homosexuality advising them to “Turn It Off” like a light switch. Elder Cunningham succeeds in comforting Elder Price that he will succeed “I Am Here For You”.

Price determined to triumph where the others have failed, sets out to teach the villagers about the founder of the Church of the Latter Day Saints, Joseph Smith, through the song “All American Prophet”. However it goes somewhat array when it turns into a song about himself leaving the villagers unimpressed and irritated. General Butt Fucking Naked arrives and announces that all of the women in the village must be circumcised by the end of the week. When one of the villagers protests the General kills him in cold blood. Nabulungi inspired by Price’s speech of an earthly paradise dreams of a better life “Sal Tlay Ka Siti”.

The Mormon missionaries are sent into panic when the Mission President requests an update on their so far unsuccessful mission. Price requests a transfer to Orlando and loyal Cunningham announces he will stick with him no matter what “I Am Here For You (Reprise)” however Price cruelly dumps Cunningham as a mission partner.

Elder Cunningham is left crushed but when Nabulungi comes to him with members of the village all wanting to learn more about the Book of Mormon he summons courage for the first time ever “Man Up”.

Act 2
Having never actually read the Book of Mormon and sensing he’s losing his crowd Elder Cunningham begins to embellish the bits of Mormon doctrine he does know with elements of the real lives of the African villagers and bits of popular fiction. His conscience personified by various characters including his dad, Joseph Smith, Hobbits and Yoda warn him about lying “Making Things Up”. However he decides as long as he’s helping the villagers it’s ok to bend the truth slightly.

Elder Price reflects on his childhood and the reoccurring nightmares of hell he had when he did something wrong “Spooky Mormon Hell Dream”. Terrified by the nightmare Price decides to return to his mission. Cunningham has managed to get 10 locals interested in the church but is reluctant to let Price back in as he is still upset about being ditched. Price sets off to prove himself by converting the General with the Book of Mormon. “I Believe”.

Cunningham continues with his unique style of preaching and succeeds in getting the villagers to agree to be baptized with Nabulungi being his first “Baptize Me”. The villagers begin to except Mormonism and the Mormons celebrate “I Am Africa”. After an unsuccessful conversion of the General Price is seen having the Book of Mormon removed from his anus. The General feels threatened by the villagers converting to Mormonism and resolves to kill them all.

Price drowns his sorrows over copious cups of coffee where Elder Cunningham finds him and informs him they need to at least pretend to work together as the Mission President and other senior Mormons are coming to congratulate their mission. After he leaves Elder Price reflects on the broken promises of the Mormon Church “Orlando”.

Price and Cunningham are congratulated by the head of the mission for their great success. Nabulungi and the villagers then perform a pageant based on their understanding of the Book of Mormon, as taught to them by Elder Cunningham “Joseph Smith American Moses”. The president is horrified and declares that the Africans are not real Mormons and orders the Elders to go home. Nabulungi is distressed as she wanted to reach paradise and curses God “Hasa Diga Eebowai Reprise”.

Cunningham is left distraught however Price realises that Cunningham has had the right idea all along and it’s not about the detail of scripture but about helping people. The pair are reconciled and set off to rescue the villagers from the General “You and Me (But Mostly Me) Reprise”.

Meanwhile Nabulungi, still angry with Cunningham, tells the rest of the village that he has been eaten by a lion. The general arrives and Nabulungi is ready to give in to his demands. She tells the villagers that Cunningham’s stories were all lies. To her surprise they reply that they had known all along that the stories were not literally true but rather metaphorical. Cunningham returns and everyone believes he has risen after being eaten by lions. Price and Cunningham work together to scare the General away and Price rallies the Mormons and Ugandans to work together and create their own faith. In the final scene the villagers, ex-communicated Mormons and newly converted General are seen going door to door to preach ‘The Book of Arnold’. “Tomorrow is a Latterday, ”Hello Reprise” and “Finale”.