Jekyll and Hyde the musical is based on Robert Louis Stevenson’s classic novel The Strange Case of Dr Jekyll and Mr Hyde. Described as a musical thriller the show was conceived by Frank Wildhorn and Steve Cuden, with a book written by Leslie Bricusse. Set in London in the 1800’s Dr Jekyll longs to cure his father’s mental illness. He uses himself as a guinea pig to test his formula transforming him inadvertently into the evil Mr Hyde. The score has a contemporary rock vibe the most famous number being “This is the Moment”. Although not a success with the critics the show developed a cult following and the original Broadway production ran for 4 years. There have been many revisions to the song list for different versions. The original Broadway production was filmed with the final cast starring David Hassellhoff. The Broadway revival starred Constantine Maroulis and Deborah Cox. The show has most recently been seen in the UK in a touring production starring Marti Pellow. 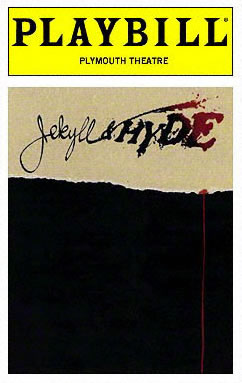 An experiment gone wrong leaves Dr Jekyll with a split personality in the form of the sinister Mr Hyde.

We are introduced to the story by John Utterson Jekyll’s lawyer and best friend, and Sir Danvers Carew who was to be Jekyll’s father in law. They introduce the show and take the audience back to an insane asylum where a Jekyll sings over his father who is a patient. (“Lost in the Darkness”). Jekyll believes the evil in his father’s soul has caused his condition. He believes that if he could remove the evil he could cure him and wishes to separate the good from the evil of the personality. (“I Need to Know”).

The inhabitants of 19th Century London describe how they want others to perceive them despite who they really are. (“Façade”)

Jekyll presents a research proposal to the Board of Governors of St. Jude’s Hospital of which Sir Danvers is the chairman. Jekyll hopes to be able to cure his father and people with similar conditions and wishes to test his formula on a human subject but is denied. (“Jekyll’s Plea”). Utterson attempts to calm Jekyll down and tells him if he’s sure his theory is right he should continue his work. (“Pursue the Truth”).

Jekyll is late for his own engagement party being thrown for him by Sir Danvers, as Jekyll is due to marry his daughter Emma. (“Façade (reprise)”) Guests at the party including the board of governors voice their concern at Emma being engaged to a Jekyll, but Sir Danvers and Emma defend him. Stride, one of the governors, is in love with Emma and tries to convince her not to marry Jekyll. She turns him down. (“Emma’s Reasons”). When Jekyll eventually arrives he explains to Emma that he may always be occupied with his work and she promises to stand by him. (“Take Me as I Am”). Sir Danvers then expresses to Emma his concerns about Jekyll’s behaviour and the prospect of losing her to which she reassures him that he never will. (“Letting Go”).

Jekyll and Utterson hit the town for Jekyll’s bachelor party and head to “The Red Rat” in Camden. (“Façade (reprise #2)”) Kind-hearted prostitute Lucy Harris is late for work, and gets in to trouble with her boss Spider. (“No One Knows Who I Am”). Lucy is interrupted by The Red Rat’s manager Nellie, who sends her on stage to do her number (“Bring On the Men”/ Good n Evil) during which she catches the eye of Jekyll. He presents Lucy with his visiting card and tells her to call on him should she ever need a friend. (“Here’s to the Night”).

Jekyll, inspired by Lucy’s song informs Utterson that he has found a subject for his experiment. He bids him goodnight and continues to his laboratory to begin work (“This Is the Moment”). He mixes the chemicals to create formula HJ7 and injects himself with it. He then becomes taken over by the dark side of his personality. (“First Transformation”). He proceeds to reek havoc on the streets of London and abuses Lucy. He names his split personality Edward Hyde (“Alive”).

Emma, Sir Danvers and Utterson are concerned having not heard from Jekyll. Jekyll’s butler informs Utterson that he has been locked in his lab the whole time, only emerging to send him to buy chemicals. Utterson confront Jekyll but he brushes it off and presents him with three letters, for Emma, Sir Danvers and himself to open if he becomes ill or disappears. Utterson warns Jekyll not to loose his life to work. Emma and her father argue about her prospective marriage to Jekyll with Emma defending the importance of his work. (“His Work and Nothing More”).

Utterson leaves and Lucy arrives with a bruise on her back. She tells Jekyll that a man called Hyde is responsible. Jekyll conceals his shock. Lucy kisses him for being kind to her and treating her wound. (“Sympathy, Tenderness”) Alone Lucy sings about how easy it would be to love Jekyll. (“Someone Like You”).

Hyde sets out to kill all the members of the board that rejected Jekyll’s work and begins by beating and murdering the Bishop of Basingstoke. (“Alive (reprise)”).

The second act is introduced again by Utterson and Sir Danvers. The people of London gossip about the Bishop’s murder while Hyde hunts the rest of his victims. (“Murder, Murder”).

Emma sneaks into Jekyll’s lab and attempts to read his diary but he stops her before she learns what’s happened. She tells him she still loves him and begs him to confide in her. (“Once Upon a Dream”). He professes his love for her but refuses to tell her the truth. After she departs he writes in his diary that he can no longer control when he turns into Mr Hyde. He is interrupted by Utterson demanding to know who Jekyll’s sole heir ‘Edward Hyde’ is. Jekyll tells him he’s a colleague and Utterson agrees to source the chemicals Jekyll requires. Alone Jekyll comes to terms with the fact that Hyde is a part of him (“Streak of Madness”). Both Lucy and Emma muse on their love for the same man (“In His Eyes”).

Back at “The Red Rat”, Lucy is visited by Hyde he informs her that he is going away but warns her she can’t leave him. Although terrified Lucy is under his control. (“Dangerous Game”). Spider then warns the revelers at the red rat to beware of the dangers ahead. (“Façade reprise”).

Utterson returns to Jekyll’s lab with the chemicals and discovers Hyde. Utterson refuses to leave the chemicals with him demanding to know what has become of his friend. Utterson threatens Hyde who injects himself and turns back into Jekyll before his eyes. Jekyll enlists Utterson to help him destroy Hyde, and deliver money to Lucy so she can escape. Jekyll mixes chemicals and prays he will be able to return to a normal life (“The Way Back”).

Utterson delivers the money and a letter to Lucy from Jekyll asking her to leave town she considers her future. (“A New Life”). Just then Hyde enters and murders her. (“Sympathy, Tenderness (reprise)”). Drenched in Lucy’s Blood Jekyll returns to his lab to fight Hyde for control of his soul. (“Confrontation”).

Utterson informs the audience that Jekyll has given up on his work, and was not able to save his father. (“Façade (reprise)”). It appears that Jekyll is back to normal as he and Emma stand before the priest ready to marry. Suddenly Jekyll turns back into Mr Hyde murders one of the wedding guests, Stride, and takes Emma hostage. The sound of Emma’s voice allows Jekyll to regain control over himself and he begs Utterson to kill him. Utterson is unable to go through with it so Jekyll impales himself on his swordstick. Jekyll dies free of Mr Hyde’s control. (“Finale”).