Song and Dance features music by Andrew Lloyd Webber with lyrics by Don Black. The show was unique at the time as it combined a one woman musical with a danced second half. The first half, which went on to be called ‘Tell Me on a Sunday’ focuses on an English girl looking for love in New York. The second half involved a ballet choreographed to ‘Variations’ which was written for Andrew’s cellist brother Julian, based on the A Minor Caprice No. 24 by Paganini. The show was very popular with audiences and went on to be a success on Broadway, after some Americanization and changes to the script. Bernadette Peters played the role of The Girl for over a year, winning a Tony Award for her performance. The whole show has not been performed in recent years, instead the ‘Song’ section has been revived in a solo form, which opened in 2003 in London’s West End. 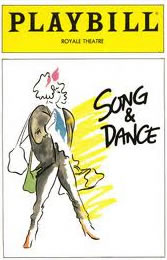 An English girl moves to New York in search of love and a new life. She walks in to an argument with her boyfriend and the two decide to break up. She frequently writes to her mother in England with news of her travels. She meets a man named Sheldon Bloom and the pair move out to LA, as he is a Hollywood producer. Although initially excited at the new style of living, she realises it isn’t for her and that she is used as a ‘trophy girlfriend’. She ends their relationship and moves back to New York. She goes on to meet a younger man and falls in love once again. As he has to move away for work she learns of his infidelity from a girlfriend and she finds herself alone once again. In New York she becomes depressed and begins dating a married man. Although she knows this is morally wrong, he is in love with her but she realises she has just been using him. She comes to the conclusion that it isn’t the end of the world to have no one.

In the ‘Dance’ section of the show we see one of the men and examine their character. At the end, the man and girl come together and they make up, joining in the Song and Dance.

1986 Tony Awards: Best Performance by a Leading Actress in a Musical (Bernadette Peters)