Mame is based on the 1955 novel and subsequent play ‘Auntie Mame’ by Patrick Dennis. The musical version features a book by Jerome Lawrence and Robert Edwin Lee and music and lyrics by Jerry Herman. The show is set in New York during the Great Depression and focuses on the eccentric bohemian Mame Dennis. Her ridiculous lifestyle is upset when her young nephew comes to stay with her, which leads to all sorts of misadventures. The musical was made into a film by Warner Brothers pictures which starred Lucille Ball, after taking over the role from Angela Lansbury. 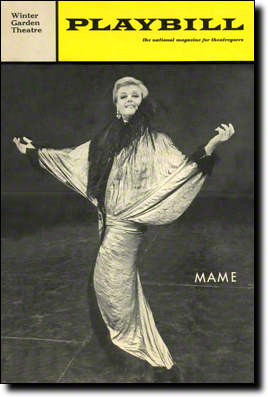 Mame is a larger-than-life personality living the high life in the Roaring Twenties in New York City. She has a collection of eccentric, wealthy society friends and her life is one endless party. Her brother in Iowa dies suddenly, and she suddenly finds herself the guardian of his 10 year-old son, Patrick.

Mame is thrilled to have Patrick in her life, but the executor of her brother’s estate, the stuffy Dwight Babcock, is less than pleased about a child being raised as part of her bohemian lifestyle. Mame encourages Patrick to “Open a New Window” and enrols him in a liberal free-thinking school. When Babcock finds out, he has Patrick sent to a private boarding school far away from the bright lights of the city.

Devastated to lose Patrick, things are about to get even worse for Mame when the stock market crashes, and she loses her entire fortune. She tries to find a job for the first time in her life, by working in a theatre with her friend Vera Charles, but when she upstages Vera, she is fired. Mame is destitute, but her servants pay her bills to ensure she survives.

Not one to give up, Mame sings “We Need a Little Christmas,” which arrives in the form of a wealthy Southern gentleman, Beauregard Jackson Picket Burnside. He is immediately besotted and proposes marriage, but Mame must impress his Southern family. They are initially hostile to her, but she manages to win them over during “The Fox Hunt.” She and Beau get married and set off on an around-the-world tour.

Beau tragically falls off the Matterhorn on their honeymoon, and Mame returns to New York in a deep depression, only to be cheered up by her old friends. Patrick has become a member of the old boys club at his preppy boarding school and becomes engaged to stuffy society girl Gloria Upson. Mame visits her family and finds that they are deeply prejudiced against the lower classes or anyone who is different. Mame confronts Patrick, saying Gloria is not right for him, and he storms off.

Mame decides to make up with Patrick by hosting an engagement party for him and Gloria and invites her family along. They are unimpressed by her wild party of friends and outraged when Mame’s pregnant friend Agnes reveals she is unmarried. The Upson family’s reaction to Mame and her friends is enough to convince Patrick that Gloria is not right for him and he breaks off their engagement. He catches the eye of Mame’s decorator Pegeen instead, and it is revealed that they ultimately get married. The play ends with Mame embarking on an adventure to India with Patrick and Pegeen’s 10 year-old son.