City of Angels features music by Cy Coleman and lyrics by David Zippel. The book by Larry Gilbert weaves together two plots – a writer attempting to turn a novel into a screenplay and the world of the fictional film. The show harks back to the 1940s film noir genre that was popular in Hollywood, and provides an interesting look at the film making industry. The show was extremely popular on Broadway, winning a number of Tony Awards and running for an impressive 2 years. An LA production proved to be similarly successful, although the London version did not take off as hoped when it opened in 1993. The show has not yet had a professional Broadway revival, but is popular amongst amateur theatre groups in both the USA and UK. 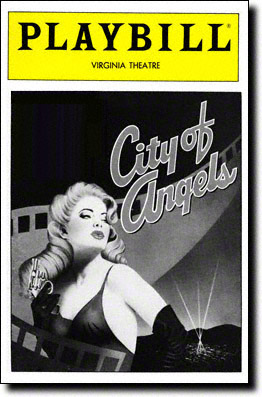 In 1940’s Hollywood, two plots are unfolding at once: a detective film noir and the writer putting that story together. Characters within the film are dressed in black-and-white while actors wearing colour indicate the real world.

Detective Stone is in his office when the beautiful Alaura Kingsley interrupts him. She hires him to find her stepdaughter, and he agrees, only to find himself beaten up by two mobsters and framed for murder. The plot continues to become overcomplicated, and it is revealed that the reason is the author, Stine, hasn’t finished writing it.

Stine is adapting his hit novel City of Angels as a screenplay, but is forced to fend off the meddling of the overbearing director Buddy Fidler, who demands constant rewrites. Things aren’t much better in Stine’s personal life as his wife Gabby discovers he is having an affair with Buddy’s secretary Donna. She promptly leaves him and heads to New York.

Meanwhile, after Buddy persuades Stine to make one change too many, Stine’s protagonist Stone begins to fight back, bemoaning his creator’s lack of integrity. Stine responds by writing another scene in which Stone is beaten up. Stine flies to New York to try to win Gabby back, but he is unsuccessful.

When he returns to LA, he is enraged to find Buddy has made drastic changes to the movie’s ending and given himself a co-writing credit. Moreover, he has hired a popular musical star who is completely unsuitable to play Stone. Stine quits the project and rips up the script, taking Stone with him. He gets into an altercation with security guards, before a role-reversal sees Stone write a scene where Stine escapes the guards and manages to get back together with his wife Gabby, living happily ever after.