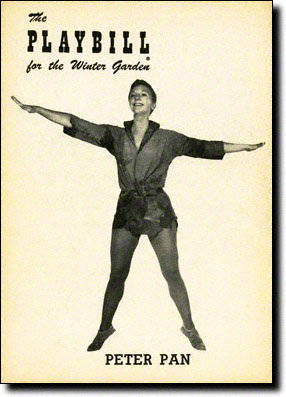 The play of the same title by J M Barrie

The first act begins in the nursery of the Darling family in London. Mr and Mrs Darling are preparing to leave for an evening out as their children, Wendy, John and Michael are playing together loudly. Their nurse Nanna, who is a dog, watches over them after previously seeing a boy at their window, flying out of sight. She managed to catch his shadow and put it away in a drawer for later use. Mr Darling is in a bad mood and makes Nana sleep outside, as Mrs Darling sings the children a lullaby (“Tender Shepherd”).

As the children fall asleep and their parents leave, Tinkerbell, a fairy enters and looks around the room. Peter Pan flies through the window looking for his shadow. He finds it but cannot managed to reattach it so begins to cry. Wendy awakes and sews his shadow back onto him. He is delighted and sings in confidence “I’ve Gotta Crow”. Peter tells Wendy all about where he lives and Tinkerbell gets jealous of Wendy. He explains about “Never Never Land” and tells her that he lives with the lost boys who refuse to grow up and have no mothers. Wendy wakes up her brothers and they agree to travel there together. Peter teaches them all how to fly and they fly through the window off into the night (“I’m Flying”).

In Never Never Land we are introduced to the Lost Boys who are hiding from Captain Hook who is trying to track down Peter and kill him. He has lost his hand after Pan fed it to a crocodile, and is paranoid the crocodile is coming back for more. As they see Peter in the sky Tinkerbell tells them to shoot down the ‘Wendy Bird’ flying next to them. As they shoot her down Peter is furious, but she is not dead, only unconscious. The boys are sorry and build a house around her, hoping that she will become their mother (“Wendy”). Captain Hook sees her and plans to kidnap Wendy and the boys.

As the discover the island they get into many adventures, yelling their thoughts on not wanting to ever grow old, “I Won’t Grow Up”. Peter rescues the Indian Tiger Lilly and her Indian tribe are grateful, dancing the “Ugg-a-Wugg” for them. The boys become homesick and Wendy sings them “Distant Melody” to get them to sleep. She tells all of the Lost Boys that her mother will adopt them back in London.

Hook and his pirates enter and kidnap all of the children, leaving Peter alone. Hook poisons his medicine and leaves it for him to drink when he awakes. Just in time Tinkerbell drinks his medicine to stop him dying and falls down dead. Peter encourages the audience to clap their hands to bring her back to life. They set off to free Wendy and the Lost Boys.

Hook sings a “Waltz” to celebrate him achievements, convinced his plan has worked. Peter arrives with a tick-tock clock that scares him and they have a fight, defeating all of the Pirates and leaving Hook to the crocodile. Everyone is excited as Peter sings a reprise of “I’ve Gotta Crow”. They all set sail back to London.

Mrs Darling is looking out of the window hoping her children will return. As she sings “Tender Shepherd” they arrive and they are both delighted. The Darling’s are happy and agree to adopt all of the Lost Boys. Wendy prays for Peter to return one day.

Years pass and Peter returns to the nursery to find a much older Wendy and her daughter. He asks her to come to Never Land but she tells him she is too grown up. Her daughter Jane wakes up and asks Peter why he is crying. He explains who he is, just as he did to Wendy and she flies off to Never Land for an adventure.