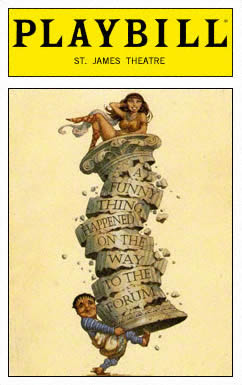 A hugely ridiculous Farce that follows slave Pseudolus as he attempts to match his owner Hero with his love Philia! Chaos ensues!

A Funny Thing Happened on the Way to the Forum is set in Ancient Rome and follows a group of unlikely neighbours. At the centre is Senex, who resides with his wife Domina, son Hero and their slaves, including Pseudolus. Next door is the house of Marcus Lycus, who spends his time buying and selling women, with Erronius neighbouring on the other side, who is abroad searching for his stolen children. Pseudolus is the slave of Hero and wants above anything to be free.

As Senex and Domina go travelling, Pseudolus is told by Hero that he is in love with Philia, and Pseudolus agrees to help him if in return he can be free. Sadly for Hero, Philia is betrothed to Gloriosus, and despite wanting to marry Hero, cannot go against her father’s wishes. Pseudolus constructs a plan to convince her father that Phillia is sick in order to stop her meeting Gloriosus. He promises to give her a sleeping potion to pretend she has died from plague, allowing her and Hero time to escape to Greece. He tells her that the captain will knock three times before entering her room and goes off to find the ingredients for the potion.

Senex arrives early from his voyage and knocks three times on his door, leading Philia to believe he is Gloriosus and she offers herself to him. Pseudolus returns and convinces him that Philia is the new maid, and sprinkles mare’s sweat onto him prompting him to take a bath. He leads him to the unoccupied house of Erronius. Erronius returns home having called off his search, and Hysterium is left to convince him that his house is now haunted and cannot be accessed. Pseudolus acts as a soothsayer and tells him that the only way to exorcise the spirit is by running around the seven hills of Rome.

Meanwhile Gloriosus arrives to claim his wife and Pseudolus hides Philia on the roof of Senex’s house. He tells Gloriosus that Philia has vanished and as the soldiers follow them onto the streets to ‘look’ for her, they manage to get ahead.

Domina also returns home early, intent on catching Senex up to no good. She disguises herself in white robes and a veil, ending up looking remarkably like Philia. Pseudolus convinces Hysterium to dress in drag and pretend to be Philia to divert attention, resulting in a mad chase across the city as Gloriosus returns, determined to find his bride. The courtesans from the house of Lycus also escape, followed by the eunuchs, adding to the never-ending disaster.

As the Captain and his troops round everyone up, Erronius jogs past, completing his cycle of Rome. He discovers that both Gloriosus and Philia are wearing a ring that marks them out as his long lost son and daughter, making their betrothal obviously void. Philia is then free to marry Hero, and it is a happy ending for all as Pseudolus is set free.