Barry Manilow’s Copacabana brings the Grammy Award winning song to life on stage. After starting life as a made for TV movie, the show became a hit in London’s West End where it played for over a year and enjoyed numerous UK tours. The show originally opened in Plymouth and appealed to fans of Manilow, becoming one of the very first jukebox musicals. With an original story patched around Manilow songs, this was a fun filled, action packed musical full of feathers and sequins. The show failed to appear on Broadway but has enjoyed life on the US amateur theatre scene, where many companies are bought in to the colour and glamour of the Havana night club scene. The infamous story of Tony and Lola the show girl is one that audiences of all ages will connect with. 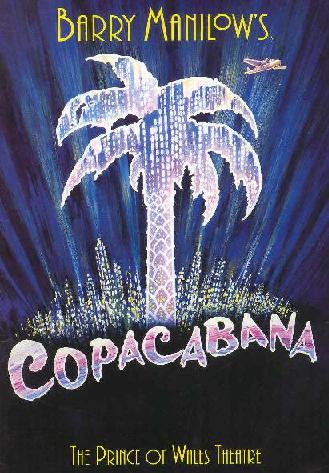 Made-for-TV movie of the same title

Cast: Gary Wilmot as Tony/Stephen and Nicola Dawn as Lola.

The musical opens with a dream sequence showing Stephen at the front of an elegant 1940s nightclub. We are in the Copacabana of his mind. As the opening number finishes we find ourselves in a New York apartment in the present day and Stephen snaps back into reality. Samantha, his wife, reminds him that her parents are visiting as she wishes he spent as much time looking at her as he does his keyboard and drum machine.

His song comes to life and we meet a new girl at the Copa in 1947, fresh off the train from Grand Central Station. As Lola enters the bar she meets Tony, a songwriter and performer at the bar who dances with her and the ensemble of eccentric chorus boys. Lola mangaes to secure an audition with the boss Sam Silver the next day. Tony watches Lola leave and decides that he is in love with her.

The next day Tony and Lola go through many rounds of auditions. Lola is disappointed with the results so far and her friend Gladys gives her some helpful advice. Tony offers to play for Lola’s audition, and as Sam Shepherd stops her she thinks she has blown it. He asks her to dance more aggressively and she becomes bolder with her moves. She gets the job and Tony finds himself back in the show. Lola begins to flirt with Tony and seeks his advice on writing a song. As he sings to her they passionately embrace.

A diamond wearing gangster Rico Castelli and his Latina girlfriend arrive at the club and Rico asks Lola for a drink after she performs. He tries to poach her for his club ‘The Tropicana in Cuba. The couples dance a Bolero, as Rico drags Lola away to his bedroom. Rico’s girlfriend Conchita is not pleased at how things are progressing, and is insulted when Rico tells her that he is taking her out of her main number in favour of Lola. She becomes jealous and goes to talk to Lola.

Back in New York Tony hears about Lola going to Havana with Rico and knows something is wrong. As Gladys tells him about the violence inflicted on the work force, he knows he has to save her from an awful fate. Sam realises that Tony and Lola are both in grave danger.

In Havana Conchita is trying to make Lola pay for stealing her man, but Lola is unaware of what has happened. As Rico arrives and dismisses Conchita he tells Lola that she will have to be happy with the position she is in. Lola is scared on the bed and we see Stephen interacting with her in a quasi-dream ballet.

Tony seeks Conchita’s help to rescue Lola. During Lola’s Pirate number he swings onstage dressed as a character, and the act is sent into meltdown. Rico jumps onto the stage and points the gun at Lola’s head, quickly turning it onto Tony. We hear a single shot, expecting one of their bodies to crumble to the ground, but instead Rico topples to the floor, biting the dust. Conchita enters with a gun and kneels over Rico’s carcass. As they prepare to leave again for New York, Lola and Tony realise they are in love. Everyone reunites for a grand reprise of the title number with the Copa girls and boys.

The modern day Stephen enters with his drum machine, pulling a feather from his pocket. He hears the montage of voices from his new creation, and as Samantha enters we realise she looks exactly like Lola. Stephen is confused and he realises that everything he wants is right in front of his eyes. He realises he is happy with Samantha, but will always remember his night of passion at the Copacabana.